The Shimazu clan lords of Satsuma han maintained five mansions in Edo. These were homes for the lords' wives, heirs, other family members, and numerous retainers, as well as housing the lord himself roughly half of the time, whenever he was in attendance in Edo in accordance with his sankin kôtai obligations. To maintain five mansions in the city was exceptional; most smaller domains maintained only one or two. The domain also maintained mansions in Kyoto, Fushimi, and Osaka. 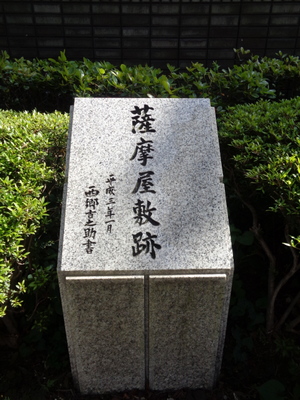 A stone marker at the former site of the Shiba mansion, inscribed with calligraphy by Saigô Kichinosuke, a grandson of Saigô Takamori

The domain's kami yashiki, or "upper mansion," was located in Shiba 3-chôme, on a site now home to the Celestine Hotel and NEC headquarters, just south of Zôjô-ji and Shiba Park along Hibiya-dôri. Previously the shimo-yashiki ("lower mansion"), the Shiba mansion became the kami-yashiki at some point after 1710,[1] with the Sakurada mansion being lowered from kami-yashiki to naka-yashiki ("middle mansion").[2]

Ryukyuan missions to Edo were generally lodged at the Shiba mansion during their time in the city. When processing up to Edo castle for formal audiences with the shogun, they typically departed the Shiba mansion before dawn, and made their way to the Sakurada mansion before continuing to the castle.[3] Both the Shiba and Sakurada mansions saw numerous banquets, formal audiences, and performances of Ryukyuan music and dance during the missions' time in the city, which usually lasted around one month.[4]

The domain's Sakurada naka-yashiki ("middle mansion") was located in Uchi-saiwai-chô 1-chôme, just east of Hibiya Park. The site is today the location of the Yamato Seimei Building. Previously the kami-yashiki, it was at some point changed to the naka-yashiki, with the Shiba mansion becoming the kami-yashiki.

The Sakurada mansion was also known as the shôzoku yashiki (lit. "costume mansion"), as it was there that the members of Ryukyuan missions changed costume on their way to and from formal audiences at Edo castle.

In 1883, the former site of this mansion became the site of the Rokumeikan, the premier Western-style venue for elite social events in Meiji period Tokyo.[7] 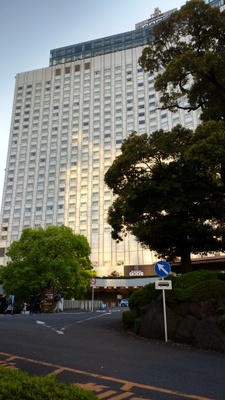 The domain's Takanawa shimo-yashiki ("lower mansion") was located in Takanawa 3-chôme. Today, the site, just in front of the JR Shinagawa Station, is the location of the Shinagawa GOOS shopping/hotel complex.

At some point after his 1787 retirement, Shimazu Shigehide made the Takanawa mansion his chief residence in Edo. It was there on 1832/int.11/26 that celebrations were held, in honor of his 88th birthday; the celebrations continued the following day at his grandson Shimazu Narioki's mansion in Shirogane.[8] Ryukyuan envoys were in attendance on both days, and particularly excellent Ryukyuan musicians and dancers were dispatched from Ryûkyû to join the embassy to Edo that year, specifically for the purpose of performing at these birthday celebrations.[9]

The Takanawa mansion compound also included the Shûchin treasure house (聚珍宝物庫), established by Shigehide to house his immense collection of plant and animal specimens. In an inscription on an associated stele, Shigehide wrote of his great desire to collect rare plants and other natural products from all over Japan and overseas, in order to better investigate and understand the truths of nature. He writes that he established this treasure house so that a hundred years hence, they might still be preserved.[10]

The domain's Shibuya shimo-yashiki was located within the yamanote area of the city, in what is today Shibuya-ku Higashi 1-chôme, the site of the Shibuya Folk and Literary Shirane Memorial Museum.[11]

The Shibuya mansion suffered no severe damage in the 1855 Ansei Earthquake, and so the ladies associated with the domain, including Atsuhime, relocated from the destroyed Shiba mansion to the Shibuya mansion at that time. It was from this mansion that Atsuhime made her formal wedding procession to Edo castle in 1856/11, to be married to Shogun Tokugawa Iesada the following month. 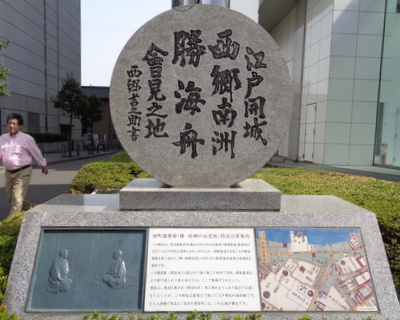 The monument on the former site of the kurayashiki at Tamachi

The domain's kura yashiki, or storehouse, was located along the canals in Shiba 5-chôme, a short distance from the Shiba kami-yashiki. This storehouse is also sometimes referred to as the Shimazu family's Mita mansion. The site is today the location of the Daiichi Tamachi Building.

The Shôheimaru, a Western-style sailing ship built in Kagoshima, sat at anchor for a time in 1855 just off-shore from this kura-yashiki.[12]

This mansion was also the site of a significant meeting between Saigô Takamori and Katsu Kaishû, at which Katsu presented the Tokugawa shogunate's formal capitulation to Saigô, thus halting Saigô's plans to take Edo castle by force. A monument to Saigô's and Katsu's success in making the fall of Edo relatively bloodless stands today on the site.