Katsu Kaishû is considered the "father" of the modern Imperial Japanese Navy.

Kaishû was born in Edo in 1823/1, the eldest son of low-ranking hatamoto Katsu Kokichi, and in his youth attended classes in Western studies and then studied naval science from the Dutch naval detachment in Nagasaki.

He succeeded his father to become head of the Katsu house on 1838/7/27. In 1841, he then received a license in Jikishinkage-ryû swordfighting from swordmaster Odani Seiichirô. He continued his studies in rangaku in the 1840s-50s.[1]

As of 1853, Kaishû was serving the Tokugawa shogunate as a public works (kobushin) official,[2] and was assigned in 1855 to aid officials overseeing the management of affairs in Shimoda;[3] later that same year he was assigned to oversee various matters in Nagasaki and also to undertake training in steamship operation.[4] Kaishû then rose in rank to become commissioner of the Tokugawa navy in 1860 and captained Japan's first cross-Pacific journey to San Francisco. In 1864, he was then named Gunkan bugyô (Warship Magistrate) and was granted the title Awa no kami. He was stripped of his position as Magistrate later that same year and sentenced to house confinement, but was restored to the position in 1866.

Kaishû believed that Japan’s future was best served to open itself to the world and this put his life in jeopardy at the hands of Japan’s pro-Imperial, anti-foreign radicals. Originally intent on cutting down Kaishû, Sakamoto Ryôma became hooked on Kaishû's vision for Japan and became his leading disciple. Kaishû protected the outlaw Ryôma and other ronin in a naval academy that Kaishû established in Kobe in 1863, installing Ryôma as its head.

Following the 1868 battle of Toba-Fushimi, in which Katsu fought for the Tokugawa shogunate, he met with Saigô Takamori (a leader of the opposing armies) at Saigô's encampment at Ikegami Honmonji. It is said that it was as a result of this meeting that the peaceful surrender of Edo castle was arranged. This spared Edo a certain degree of destruction, which might have resulted had the shogunate chosen to hold out further.

In the Meiji period, Kaishû was granted the title of Hakushaku in the new Meiji peerage, and went on to serve as head of the Privy Council for a time, and also as naval commissioner until his retirement from public life. In 1891, via a connection through Tsuda Sen (father of Tsuda Umeko), Kaishû purchased a plot of land at Senzoku-ike (Senzoku Pond), and built his retirement home there. Following his death in 1899, he was buried with his wife near the site of their home, on the shores of Senzoku Pond, in what is today Senzoku-ike kôen (Senzoku Pond Public Park) in Tokyo. 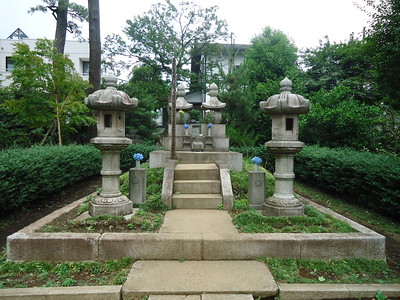