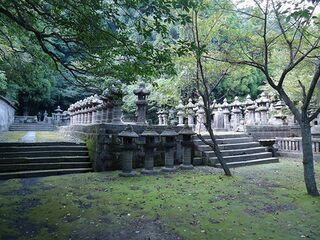 Shigehide's gravesite at Fukushô-ji in Kagoshima, surrounded by tens of stone lanterns, is one of the largest in the entire Shimazu clan cemetery

Shimazu Shigehide was the 25th head of the Shimazu clan and eighth Edo period lord of Satsuma han, ruling the domain from 1755 to 1787. He is known especially for his support for Rangaku and honzôgaku (herbal medicine / botany), and for his relatively open policies regarding travel and exchanges between Satsuma and other provinces. Whereas travelers were generally not permitted to enter within the borders of the domain for much of the Edo period, during Shigehide's reign this was relaxed.

He was a son of Shimazu Shigetoshi, and succeeded his father as head of the clan and of the domain in 1755, at age ten. Until he reached his majority in 1760 (at age 15), Shimazu Hisamoto served as an unofficial regent for the young daimyô; Shigehide's grandfather Shimazu Tsugutoyo counseled him as well. Known as Zenjirô in his youth, Shigehide took on the names Hyôgo Hisakata and Matsudaira Matasaburô Tadahiro when he came of age.

Shigehide married in 1763, at the age of 18.[1] The following year, he accompanied a Ryukyuan mission to Edo, and was elevated in court rank to Upper Junior Fourth Rank. This was the only such mission he escorted as active daimyô.[2]

It is said that Shigehide desired to bring more commerce and trade into the domain, and believed that greater merchant activity was essential for a prosperous castle town; as a result, he relaxed the domain's strict border policies, known as the strictest in the realm, and sometimes even referred to as "the closed country within the closed country."[3] He showed a strong interest in European culture and knowledge, calling upon a number of Dutch factors to talk with him at his Edo mansion, including Hendrik Doeff in 1806, Johannes Frederik van Overmeer Fisscher in 1822, and Philipp Franz von Siebold in 1826. He is also said to have acquired some proficiency in writing in the Dutch language.

He also had a strong interest in Chinese language, and often visited the Ôbaku Zen temple Manpuku-ji in Uji when on his way to or from Edo. The abbots of Manpuku-ji were Chinese, and the temple was perhaps the only place in Japan, outside of Nagasaki, where one could go to study Chinese. On a number of occasions, he also had envoys from the Ryûkyû Kingdom present lectures or demonstrations, or converse with him, in Chinese.[4]

Shigehide established a number of academic institutions within the domain, including the Zôshikan and Enbukan - schools for training in both military & literary arts - in 1773, a medical college (Igaku-kan) the following year, and in 1779, an astronomical observatory and mathematics academy called the Meiji-kan; later renamed Tenmonkan, this site grew to become the chief center of urban culture in Kagoshima.[5] Shigehide also oversaw the construction of botanical gardens on Amami Ôshima, on the grounds of Kagoshima castle, and also in Edo, for the study of herbs and medicines. He also played a role in the editing or compilation of a number of scholarly volumes, including a book on Chinese language called Nanzan zokugo kô 南山俗語考; a book on birds called Chômei binran 鳥名便覧; one on local products of Ryûkyû, entitled Ryûkyû sanbutsu shi 琉球産物志; a history of Satsuma and the Shimazu, called Shimazu kokushi 島津国史; and a volume on famous sites in Satsuma, called Sappan meishô shi 薩藩名勝志; among others.

In 1787, he stepped down in favor of his son, Shimazu Narinobu. In his retirement, Shigehide took on the art-names (gô) Nanzan and Eiô. He remained thoroughly involved in matters of domainal governance & administration in his retirement, and indeed after Narinobu's administration began to reverse Shigehide's own policies, and his progress in improving the domain's finances, in 1808 Shigehide had a number of chief retainers exiled or killed in what has come to be known as the Kinshirokukuzure Incident; the following year, he forced Narinobu to abdicate the lordship, being replaced by his son (Shigehide's grandson) Shimazu Narioki.

In 1827, he established a treasure museum within his Edo mansion. In 1832, he celebrated his 88th birthday in Edo; that same year saw another Ryukyuan embassy to Edo, which met with likely the greatest number of (retired, acting, and future) Shimazu lords ever gathered in one place, as Shigehide, his son the retired lord Shimazu Narinobu, Narinobu's son the active lord Narioki, and Narioki's heir at that time, Shimazu Nariakira, were all present at the Shimazu Edo mansions.

Shigehide's concubines included Chima no kata, eldest daughter of the court noble Tsutsumi Toshinaga, whose direct descendants would include the famous Atsuhime.[6] Shigehide's children included his successor as lord of Satsuma, Shimazu Narinobu (1774-1841), as well as three other sons who were adopted into other daimyô families and became lords of their own domains. These were Shimazu Masataka (lord of Nakatsu han in Buzen province, adopted by Okudaira Masao), Shimazu Narihiro (lord of Fukuoka han, adopted by Kuroda Narikiyo), and Shimazu Nobuyuki (lord of Hachinohe han, adopted by Nanbu Nobumasa). Shigehide's daughter Shige-hime, meanwhile, was married into the Tokugawa clan, becoming the chief wife of Shogun Tokugawa Ienari.[7] After becoming father-in-law to the shogun, Shigehide requested and received special privileges when visiting Edo castle, including having the way cleared for him of other people (including other daimyô and their retainers) as he made his way from the palanquin-dismounting place to the genkan (entrance foyer) of the honmaru palace.[8] For a time, his prominence was such that he was sometimes referred to as Takanawa geba shôgun, or "the Shogun who dismounts at Takanawa," a reference to the Shimazu clan's mansion in the Takanawa neighborhood of Edo.

Shigehide died in Edo on 1833/1/15. Though he had wished to be buried at Zuisei-ji in Edo, Narioki ordered that his remains be returned to Kagoshima to be buried at the Shimazu clan cemetery at Fukushô-ji in Kagoshima, alongside two of his wives, and his daughter Keihime.[9] The burial and funeral ceremony was held at Fukushô-ji on 1833/4/8.[10]