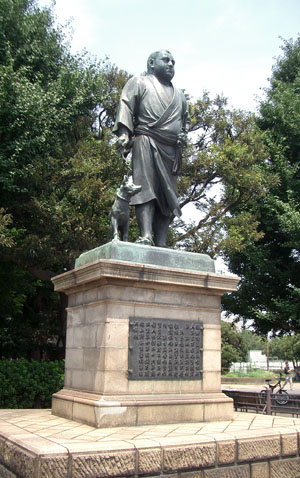 The military leader of Satsuma during the waning days of the Tokugawa Shogunate, Saigô played a pivotal role in the restoration of Imperial rule to Japan. While his daimyo, Shimazu Hisamitsu, tended to vacillate on his position regarding supporting the shogunate or not, Saigô was resolute in his distaste for the Tokugawa regime and was determined to completely crush Tokugawa power at almost any cost. Saigô was one of Sakamoto Ryôma's closest allies and friends, but some historians have speculated that he may have had a hand in Ryôma's assassination by leaking the location of Ryôma's hideout to Bakufu officials. The logic behind this speculation is that Saigô deemed that Ryôma would be a formidable roadblock in his plan to crush the Tokugawa. Surprisingly, Saigô went on to become the commander-in-chief of the Meiji army, laying the groundwork for what became the modern Imperial Japanese Army.

Saigô was born in 1828 in the Shita-Kajiya-machi neighborhood of Kagoshima, the eldest of seven children of a low-ranking samurai family. His father's name was Kichibei, and his mother's name was Masa.[2] The eldest child of four brothers and three sisters, his childhood name was Kokichi.[3] He was also known as Kichinosuke, and later took on the pseudonym (gô) Nanshû. As a youth, he studied at the Zôshikan, but suffered a serious injury at age 13, and turned away from martial arts, towards a greater focus on academic study. He later served as nise gashira (youth leader). Around age 17, he submitted opinions on agricultural administration which attracted the attention of Lord Shimazu Nariakira, who then made Saigô one of his advisors in 1854.[4] Nariakira dispatched Takamori to Edo in 1857 to help Matsudaira Yoshinaga, lord of Fukui han, in his efforts to get Tokugawa Yoshinobu named shogunal heir.[5]

When Nariakira died suddenly in 1858, Saigô joined the monk Gesshô in a desperate act of loyalty, as both attempted to drown themselves in Kinko Bay in order to join their lord in death.[6] Saigô survived, however, and was then exiled to Amami Ôshima in 1859. While on Amami, he took on the name Kikuchi Gengo[2] and married a local woman named Ryû Aiko (aka Aikana), with whom he had two children: a daughter named Kikuko and a son, Saigô Kikujirô.[2] Initially living for 2 years, 8 months in one of the highest-ranking homes in the Tatsugô neighborhood where Aikana's family was prominent and influential, Saigô built a new home several blocks away following the birth of their first child, Kikujirô.[7]

In 1862/2, he was called to the capital, but was exiled again, to Tokunoshima in the sixth month, and then to Okinoerabu Island in the intercalary 8th month.[8] He remained there roughly a year and a half, until the 2nd month of 1864.[9]

After returning from his exile in 1864, Saigô took up an official military position in the Satsuma domain government, and also joined Ôkubo Toshimichi and others in agitating for the toppling of the Tokugawa shogunate. The following year he became head of the guard (Ôban-no-kami). That same year, 1865, he married a woman named Ito (or Itoko), with whom he later had three sons: Toratarô, Umajirô, and Torazô.[2]

Saigô then went on to be one of the chief leaders of both the political/ideological and military campaigns against the shogunate, and was directly involved in negotiating the peaceful surrender of Edo castle in 1868/4.

Following the Meiji Restoration, Saigô served briefly as Daisanji in Kagoshima,[8] before relocating to Tokyo in 1871 to become one of the inner circle of leaders of the new government. He played a key role in suggesting, formulating, and enacting numerous major policies, including the abolition of the han.

When Iwakura Tomomi, Ôkubo Toshimichi, Katsura Kogorô, and a number of other top government ministers left Japan on a major mission to Europe and the US in 1871, Saigô stayed behind and took over much of the top-level governmental administration. The following year, he was named Army General (rikugun gensui) and governor-general of the imperial guard (Konoe totoku).[8]

When Iwakura and the others returned in 1873, however, a factional dispute emerged which split the government. Saigô supported proposals to invade Korea at this time, believing that only with China and Korea on her side could Japan hope to successfully resist the West; he expressed in a letter to Itagaki Taisuke in that year that he was willing to go so far as to travel to Korea as an ambassador and arrange for himself to be killed in order to manufacture a justification for invasion.[10] The invasion was ardently opposed by his younger brother Saigô Tsugumichi, among many others, and the dispute ended in Saigô voluntarily leaving the government and returning to Kagoshima in November 1873. There, he established a private academy called the Shigakkô, and began training a new generation of Satsuma political and military leaders.

In 1877, he led these men and others in the Satsuma Rebellion, the largest shizoku (former samurai) uprising against the Meiji government. The rebellion was ultimately unsuccessful, and Saigô died on 9/24 making a last stand at Shiroyama in Kagoshima, fighting against the very Restoration government he had fought to establish a decade earlier. After Saigô took two bullets, and was cornered by enemy forces, he Saigô performed seppuku, with Beppu Shinsuke as his second.[8]

Saigô was buried at the Nanshû Cemetery in Kagoshima, alongside more than 2,000 of those also killed in the Satsuma Rebellion, and he was enshrined at the Nanshû Shrine at the cemetery.

He has become one of the most lionized and celebrated figures in Japanese history. Despite his opposition to the State, the Empire, in the end, he is nevertheless celebrated for his bravery, his devotion to his ideals, and his willingness to die for those ideals in 1877, as well as for his successful negotiation of the bloodless transfer of Edo in 1868, where the wars of the Restoration could have otherwise been so much more lengthy and bloody than they were.

A statue of Saigô, designed by Takamura Kôun and erected in Ueno Park in 1898, faces towards the Tokyo Imperial Palace, celebrating him as the leader of the armies which took Edo castle in 1868; it does not face away from the castle, least of all facing towards Kagoshima, which might suggest Saigô's betrayal of the Imperial state and loyalty to his Satsuma samurai roots.[11] Saigô was posthumously pardoned, along with a number of other "enemies of the Court" in 1889.[12]

Another significant statue of Saigô was erected in Kagoshima in 1937, and still stands today. Over five meters tall, it was designed by Kagoshima native Andô Teru, who was later killed in air raids in 1945.[13]