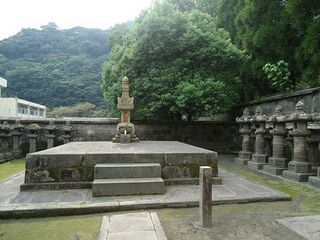 Shimazu Narioki was the 10th Edo period lord of Satsuma han. He is considered the 27th head of the clan, counting since the beginning of the Kamakura period.

The eldest son of daimyô Shimazu Narinobu, he is known for his fiscal reforms and attempts to implement a sugar monopoly, as well as his military preparations, including the production of cannon and small arms. Over the course of his career, Narioki escorted three Ryukyuan missions to Edo, and was raised in rank to Lower Senior Fourth Rank in 1832, and then later from Ôsumi-no-kami, Upper Senior Fourth Rank, and Saishô to Middle Captain of the Right (Ukon'e chûjô).[1] This was nearly the highest rank achieved by any Shimazu lord in the Edo period; Narioki's rank was matched only by Shimazu Yoshitaka, and exceeded only by Shimazu (Tadatsune) Iehisa.[2] Narioki is also known for his skill at tea ceremony.

Judged retrospectively from the outcomes of the Bakumatsu and Meiji periods, Narioki has been characterized as "conservative," stubbornly resistant to the progressive, or arguably radical, ideas of his son Shimazu Nariakira, who eventually engineered Narioki's forced retirement in 1851.

Narioki was born in Edo, and was raised in part by his adoptive mother, a younger sister of Satake Yoshikazu, lord of Akita han. In his childhood, he was known by a number of names, including Kennosuke, Torajumaru, and Matasaburô Tadayoshi. Narioki became lord of Satsuma in 1809, at age 19, following his father's forced retirement in the wake of the Kinshirokukuzure Incident. Narioki's grandfather, the former Satsuma daimyô Shimazu Shigehide, served as his formal regent for only the first year of his administration, but for the following 13 years, until Shigehide's death in 1833, Narioki consulted Shigehide on occasion, on matters of particular import.

Zusho Shôzaemon, who Narioki appointed as one of his top advisors in 1827 (possibly at the recommendation of Shigehide), is remembered today as one of the most influential Shimazu retainers of the Edo period. Zusho helped Narioki to implement a number of significant financial reforms which eliminated the domain's massive 5,000,000 ryô debt, which had accumulated over the previous 250 years without any interest being paid up to that time. Zusho accomplished this in part through strengthening monopolies on sugar, rapeseed, and other medicinal plant products, intensifying the exploitation of the Amami Islands, and revising the patterns of trade with Ryûkyû. By the end of this, the domain not only paid down its debt, but developed a savings of 500,000 ryô in its coffers. Some scholars have called this one of the "miracles" of Japanese history, that Satsuma should come back so successfully from such a dire financial situation.[3] Zusho also guided Narioki in taking steps to begin building a Western-style military for Satsuma, and to enhance the military defense of the Kingdom of Ryûkyû against Western encroachment. Along similar lines, Narioki also established in the 1840s the Nakamura seiyakusho, a center for researching Western sciences and medicine, and made efforts to implement Western techniques or technologies.

Incidents of Western incursions into Japanese waters began to become more frequent in the late 1830s and 1840s; combined with news of the Qing Dynasty's humiliation at the hands of the British in the Opium War, among other events, these developments spurred discussions within the governments of many domains, which soon grew into factionalism and political tensions. Narioki's eldest son Shimazu Nariakira began to vie for influence within the domain government by this time as well, however, eventually developing a powerful faction against his father both within the domain government, and among allies in the shogun's court. For a brief time, Narioki's power at home ebbed and waned significantly whenever he was forced to travel to Edo as part of his sankin kôtai obligations, unavoidably leaving Nariakira to pursue his own aims in Narioki's absence; thus, for a number of years, Nariakira and Zusho worked to develop the domain's economic and military efforts separately from one another; while not entirely at cross-purposes, this was at the very least terribly inefficient.[4]

When several of Nariakira's children died one after the other, Nariakira and his followers accused Zusho, or Narioki's favored concubine Oyura no kata, of having placed some kind of curse on them; Nariakira and/or some of his followers then plotted to assassinate Zusho and/or other prominent supporters of Narioki. These plots were discovered before they were executed, and a number of Nariakira's followers were severely punished.

These tensions led into a succession dispute flaring up beginning in 1848 between Nariakira (Narioki's eldest son by his first wife, Kenshôin), and Shimazu Hisamitsu, Narioki's son by Oyura no kata. While Oyura of course supported Hisamitsu, many of the young prominent domain retainers, along with prominent domain scholars, supported Nariakira. The factionalism again led to assassination plots, this time aimed chiefly against Hisamitsu and O-yura; Zusho was forced to commit suicide in 1848/12 after Nariakira's faction revealed some of his plans to the shogunate, and the following year, in connection with that or other plots, Narioki had Takasaki Gorôemon, Kondô Ryûzaemon, and roughly forty other members of Nariakira's faction rounded up and either exiled or ordered to commit suicide. The dispute ended in 1851/2, with Rôjû Abe Masahiro, Fukuoka han daimyô Kuroda Narihiro, and Date Munenari of Uwajima han successfully pressuring Narioki to step down in favor of Nariakira.[5]

Narioki's other children included Iku-hime, who married Konoe Tadahiro; Shimazu Naritoshi, who was adopted by Ikeda Narimasa and succeeded him as lord of Okayama han; Toki-hime, who married Yamauchi Toyoteru, lord of Tosa han.

Narioki then spent the remainder of his years in retirement at the Shimazu Tamazato mansion, with the exception of a brief time in 1858 to 1859, when he served as guardian or regent for his grandson, Shimazu Tadayoshi, who had succeeded Nariakira. Following Narioki's death in 1859 at the age of 69, the previously snubbed Hisamitsu served as regent for his son Tadayoshi and was significantly influential in Satsuma's involvement in the politics and events of the latter half of the Bakumatsu period. Meanwhile, Narioki was buried at the Shimazu clan cemetery at Fukushô-ji, in Kagoshima. His grave, along with that of Oyura no kata, are located in a separate, and thus somewhat elevated, section of the cemetery, with its own stone-walled enclosure. His mother and first wife are buried at Fukushô-ji as well.