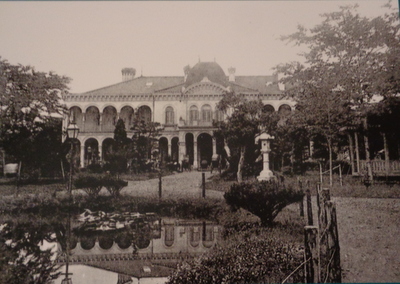 An 1893 photo of the Rokumeikan

The Rokumeikan (lit. "Deer Cry Pavilion"), designed by Josiah Conder and completed in 1883, was the premier location where the Meiji government provided lodgings for prominent foreign guests (including royals and heads of state). It also served, variously, as restaurant, event venue, concert hall, private club, or as a place for lessons in Western etiquette and ballroom dance, as well as in other roles depending on the occasion. Though chiefly known as the site of various interactions with Westerners, the Rokumeikan was also the site of numerous more everyday meetings, dinners, and receptions attended chiefly or exclusively by Japanese elites.

It was preceded in that role by the Enryôkan, a wooden structure in Western style built somewhat hastily in 1869 on the grounds of the Hama Detached Palace (Hama rikyû) to house Prince Alfred, second son of Queen Victoria, who in that year became the first British royal to visit Japan.[1] The Enryôkan also housed Ulysses S. Grant and his wife in 1879 and King Kalakaua of Hawaii in 1881,[2] among others, before being replaced in its function by the Rokumeikan. Much of the Western-style furniture and other furnishings were removed from the Enryôkan to the Rokumeikan at that time,[3] which was built just outside the Imperial Palace compound, but within the Yamashitamon (Yamashita Gate), on grounds which had previously been the site of the Soto-Sakurada residence of the Shimazu clan of Satsuma han.[4]

The Rokumeikan project got its start when Conder was approached in 1880 by Foreign Minister Inoue Kaoru to design a space for the Japanese government to entertain Western visitors in Western style. Inoue would remain actively involved in the design, and other aspects of the project, throughout its construction; he attempted, though not entirely successfully, to guide Conder into designing something more fully Western in style, without such "Saracenic" influences as Conder ended up including. It was also Inoue who approved the name "Rokumeikan," which did not appear on any signage on the building, but which was shown in gaslights at the hall's opening ceremonies on November 28, 1883.

In designing the Rokumeikan, Conder wished to create something in brick or stone which would be more resilient in a fire than Japan's traditionally wooden buildings, but something which would still reflect a non-European aesthetic. He thus drew upon Moorish and Venetian (that is, classically "Oriental[ist]") styles in his design. The end result was a two-story brick building, painted white, in a style Conder called "Renaissance villa" style. It featured a trio of arches over the entrance of a central pavilion which projected slightly from a facade that consisted chiefly, on both floors, of open porches lined by columns and arches. Accents of metal filigree and palmleaf motifs on the capitals suggested a Moorish flavor, and the entire structure was topped by a mansard roof (squarish, and slightly sloping).

The original plans for the Rokumeikan have been lost, but numerous photographs, floorplans, and written descriptions survive, along with some pieces of the structure itself. The ground floor consisted chiefly of dining rooms, smoking rooms, a library, and a billiard hall. The main staircase was carved in wood and supported by Corinthian columns. The second floor housed salons, bedroom suites, and a ballroom, the two floors combined covering roughly 15,000 square feet of floor space.

Construction began in January 1881, and was completed in July 1883. It is said to have perhaps cost as much as 180,000 yen, a very sizable sum, but still quite a bit less than certain other projects of the time, such as the palace Conder designed for Prince Arisugawa, or the 240,000 yen original wooden National Diet Building. Following its opening that November, the Rokumeikan was not only host to numerous foreign dignitaries, but also to events such as an annual ball held every November 3, in honor of the emperor's birthday, attended by many members of the Imperial family (though typically not by the emperor himself). Balls and parties at the Rokumeikan, many of them held by a Ball Association (Butôkai) which emerged specifically around the hall, often attracted as many as one thousand attendees, including high-ranking government ministers and officials, foreign consuls based in Yokohama, business tycoons, and prominent members of the resident foreign community. An additional train was often run following these events, especially for those seeking to return to Yokohama.

Guests were expected to dress in the Western manner (women could wear formal kimono if they wished), and to observe Western manners. Above all, warnings published in the newspapers advised attendees to avoid doing anything which would look bad in the eyes of Westerners. In its observance of Western norms of high society, the Rokumeikan was a symbolic center of a number of social shifts in the Meiji period, including that men were invited (or even expected) to be accompanied by women, in sharp contrast to the sharp divisions in gendered participation in formal events among high (samurai) society in the Edo period.

Though highly regarded as the center of Western-style upper-class social life in Meiji era Tokyo, the Rokumeikan was frequently described in negative terms by people at the time, especially Western visitors, who found the building disappointing, mediocre, or otherwise inadequate. Many Westerners also commented that they found the social events there boring or even dreary, though it would seem that many of the Japanese visitors must have found the events quite exciting, or else the Rokumeikan would not have the romantic reputation that it does.

Lessons in ballroom dance and Western etiquette, held fairly regularly for a few years, ended in 1887, and in 1890, the government decided to sell the property; it then became the private "Peers' Club" (Kizoku kaikan) of the Peers Association.

Following an earthquake, Conder oversaw repairs on one occasion in 1897, installing electric lights, expanding the central pavilion by an additional story, and updating the furnishings of the guest rooms. In the years after that, the Rokumeikan continued to see numerous prominent visitors, such as Percival Lowell, and events such as a dinner thrown in March 1906 by Prime Minister Saionji Kinmochi and the head of the Bank of Japan for Jacob Schiff, who played a crucial role in financing Japan's victory in the Russo-Japanese War. The building finally met its end in 1941, seemingly simply because of its age, and the desire to build other buildings in that space.

The hall is the setting or subject of numerous literary works, including works by Pierre Loti, Akutagawa Ryûnosuke's Butô ("The Ball"), and Mishima Yukio's 1956 play Rokumeikan, the latter two of which take place at a ball held there in November 1886.