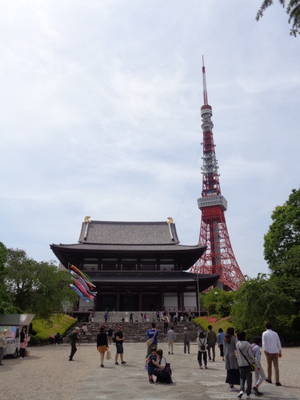 The main hall at Zôjô-ji, with Tokyo Tower visible behind it 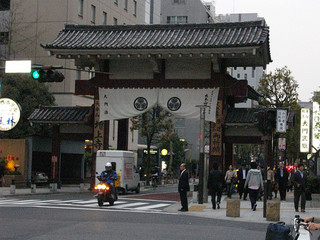 The Great Gate (daimon) of Zôjô-ji, which gives the neighborhood of Shiba Daimon, as well as the Daimon subway station, their names

Zôjô-ji is a Jôdo-shû Buddhist temple located in the Shiba neighborhood of Tokyo, originally established in 1393.[1] Along with Kan'ei-ji, it was one of two Tokugawa clan family temples in the Tokugawa shogunal capital of Edo. Six Tokugawa shoguns are buried on the temple grounds; the graves of six more can be found at Kan'ei-ji.

Zôjô-ji was made a family mortuary temple of the Tokugawa clan in 1598. Tokugawa Ieyasu, already planning out his (future) capital, thought the location ideal for a variety of reasons, including its position to the south of Edo castle, protecting the city spiritually from that direction, and providing a certain symmetry to Nikkô in the north. An additional worship hall was completed in 1605, and the entire complex was renovated or refurbished in 1634.

The main gate of the temple, known today as Shiba Daimon ("Shiba Great Gate"), gives its name to the nearby Daimon subway station. Donated to the temple by the City of Tokyo in the Meiji period, it was replaced with the current concrete version in 1937, and stands a short distance away from the temple grounds. The large gate which actually functions as the entrance into the temple grounds is known as the Sangedatsumon, and has been designated an Important Cultural Property.[2]

The shogunal graves at Zôjô-ji were relocated somewhat, within the grounds, in 1958; in the process, much was learned about shogunal funerary practices. Though the graves were off-limits to the public for many years, beginning in 2008, the shogunal cemetery has been opened to the public on set days of the year.

The grave of Shogun Tokugawa Ienobu is among the best preserved, and provides an indication of how most of the shoguns were likely buried. His body, dressed in the formal court robes of a naidaijin and with his hair in a topknot, was embalmed and laid to rest in two wooden coffins, which were in turn placed within a copper coffin, within a stone chamber. A mace was left in his hands, and a sword at his side. Ash and lime were packed into the chamber, and into the coffins.

The other shogunal graves at Zôjô-ji are those of: