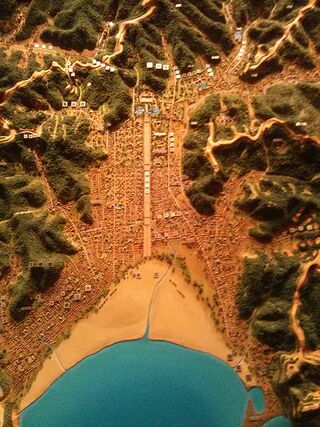 Map of Kamakura at the National Museum of Japanese History. Wakamiya-ôji is clearly visible in the center, connecting Tsurugaoka Hachiman Shrine and the beach. 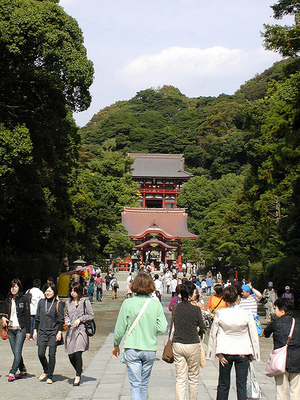 A view of Tsurugaoka Hachimangû, with the mai-den (ritual dance stage) in the middle ground, and the main worship hall in the background 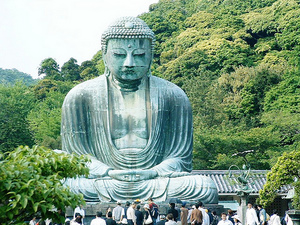 Kamakura is a small city in Kanagawa prefecture (formerly, Sagami province), to the west of Tokyo and Yokohama. It was the seat of the Kamakura shogunate from 1192 to 1333.

The city is situated in a valley and its surrounding mountains. The main portion of the city is organized around Wakamiya-ôji, a major boulevard which runs roughly directly north-south, from Tsurugaoka Hachiman Shrine, nestled up against the mountains, to the beach in the south. Buddhist temples, other sites, and residential neighborhoods are scattered across the surrounding mountains. The sacred island of Enoshima lies a short distance to the southwest.

Two of the most famous sites in the city are Tsurugaoka Hachiman Shrine, and the Kamakura Daibutsu (or, Great Buddha). Tsurugaoka was one of the chief patron shrines of the Minamoto clan (the clan of the first three Kamakura shoguns), and is dedicated to the warrior deity Hachiman. It was relocated by Yoritomo in 1180 to its current site at the northern end of Wakamiya-ôji, where it formed the core of the medieval city of Kamakura, around which the shogunate administrative offices, as well as the residences of the shogun and his chief retainers, were organized. The Daibutsu is easily of the most famous and widely-recognizable sights in all of Japan. The second-largest bronze Buddha statue in the country, it dates back to 1252; it was originally located indoors, but though it has been left exposed to the elements since that hall was destroyed in a tsunami in 1498, the Buddha remains in its original location and has survived every natural disaster since. It is the only Buddha sculpture in the city to be designated a National Treasure.[1] Other significant temples and shrines in the city include Hasedera, founded in the 8th century, and the Shinto shrines Sasuke Inari and Zeniarai Benten.

Kamakura is also a major center of Zen Buddhism in Japan, and is home to the Kamakura Gozan (lit. "Five Mountains," five particularly prominent Zen temples), alongside a great number of other temples. The Five are Kenchô-ji, Engaku-ji, Jufuku-ji, Jochi-ji, and Jomyô-ji.[2]

The city is protected in the unlucky northeastern direction by the Ebisu Hall of Hongaku-ji, erected by Minamoto no Yoritomo for that purpose; the Enryaku-ji on Mt. Hiei and Sensô-ji in Asakusa serve a similar spiritual purpose for the cities of Kyoto and Edo/Tokyo respectively.

A number of significant historical figures are buried in Kamakura, including Minamoto no Yoritomo, the swordsmith Masamune, and the founders of the Môri and Shimazu clans, as well as Ôe no Hiromoto, and members of the Hôjô, Chiba, and Hiki clans prominent in the Kamakura shogunate itself.

Minamoto no Yoritomo established himself in Kamakura in 1180 as he called his banners to war against the Taira clan. Once the dust settled in 1185, he made the city the seat of his new shogunate.

The core of the city was fairly small, and remains so today; major samurai residences and offices were located in close proximity to one another, and to the Hachiman Shrine, and all of this was only a short distance from the beach. This geography factored significantly in the events of the 1213 Wada Conflict, in which Wada Yoshimori launched attacks against shogunal regent Hôjô Yoshitoki. Since their residences were located in such proximity to one another, it was impossible for Wada to hide his military preparations from the Hôjô; by the time he launched his attack, various top-ranking members of the Hôjô clan had already taken refuge within the shrine, or fled otherwise. Still, the attack took place, with Wada seeking to destroy the homes of the Hôjô regent, the shogun Minamoto no Sanetomo, and chief Hôjô retainer Ôe Hiromoto; his forces were pursued down the main boulevard to the beach, and then back up into the city, before being defeated.[3]

Following the assassination of Shogun Minamoto no Sanetomo in 1219, which marked the end of the Minamoto line of shoguns, and led to increased Hôjô control over the shogunate, in 1225 the shogunal residence and administrative offices, known as the Ôkura bakufu, were moved from their location northeast of Tsurugaoka Hachimangû to a smaller site, along Wakamiya-ôji. The new shogunal compound was known as Utsunomiya-tsuji-bakufu, and the Hôjô clan mansion - larger than the new shogunal residence - now stood in a more prestigious location, closer to Tsurugaoka Hachiman than the shogun's residence.

The city saw a number of significant religious developments over the course of the Kamakura period. The Hôjô clan, regents to the shoguns, heavily patronized Zen Buddhism, and Kamakura joined Kyoto as one of the chief centers of Zen practice in the country. The major temples of Kenchô-ji and Engaku-ji were founded in 1253 and 1282 respectively, with Kenchô-ji being the first temple in all of Japan to be originally founded as a Zen temple, though others elsewhere in the country had been converted to Zen use from another sect. Each features gardens designed by Musô Soseki, and houses a number of National Treasures and Important Cultural Properties. The monk Nichiren also founded his Lotus Sect school of Buddhism in Kamakura in the 13th century.

Construction began on a massive wooden Buddha statue, and a daibutsuden ("Great Buddha Hall") in which to house it, in 1238. This Buddha was completed in 1243, but was then lost in a storm in 1247, being replaced in 1252 by the bronze Buddha famous today.[1]

The city saw considerable violence again in the 1330s, as forces loyal to the shogunate, and to Emperor Go-Daigo, battled over control. The city fell to Imperial forces led by Nitta Yoshisada in 1333, and before the end of the year, the shogunate officially fell, and the last Hôjô regent, Hôjô Takatoki committed suicide. Takatoki's son, Hôjô Tokiyuki, then retook the city, however, in 1335, holding it for only a brief time before Ashikaga Takauji took it from him later that year.

The Sengoku period brought violence to the city once more. The city was burned by Imagawa Noritada in 1455, and fell to forces of Ise Shinkurô (Hôjô Sôun) in 1512. Sôun established himself as lord of Kamakura, granting tax exemptions to several of the major temples while continuing to fight to secure his power over the surrounding region. Satomi clan staged a landing at the beach in 1524 in an attempt to seize the city from Sôun's successor Hôjô Ujitsuna; though they ultimately retreated, the Satomi burned much of the city, including Tsurugaoka Hachiman, to the ground, once again. Ujitsuna immediately afterwards began overseeing the reconstruction of the shrine, and of the city, however.

Kamakura was spared Allied bombing during World War II, along with Kyoto and Nara, on account of these cities' historical and cultural significance for world heritage. As a result, a great many historical buildings survive in Kamakura, dating in many cases all the way back to the Muromachi or even Kamakura periods. Harvard professor Langdon Warner is often credited with convincing the US military to spare these cities, and a plaque stands in his honor outside Kamakura Station today for that reason; however, it has been compellingly argued that Secretary of War Henry L. Stimson, and not Warner, is the one who should be credited.[4]