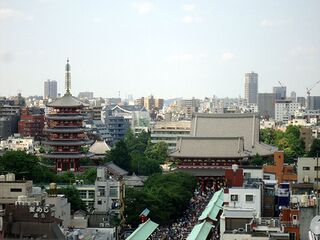 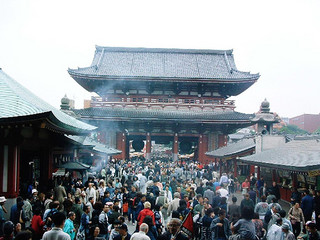 The Hôzômon and plaza, seen from the steps of the main worship hall 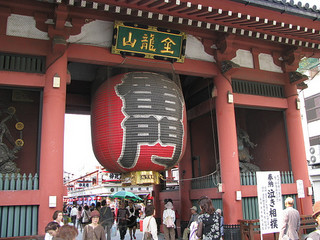 The Kaminarimon, with its famous paper lantern

Sensô-ji is the oldest Buddhist temple in Tokyo. Originally founded in 645, it forms the center of the Asakusa district, and served to defend the shogunal capital of Edo (and now Tokyo) from the unlucky northeastern direction. It formerly belonged to the Tendai sect of Buddhism, but is today the head temple of its own branch of Shôkannon Buddhism.

The temple's origins are claimed to lie in the discovery, in 628, of a small, pure gold statue of Kannon in the Miyatogawa (the Miyato River, today known as the Sumidagawa). After this discovery by peasants who had been fishing in the river, a shrine or temple was built for the Kannon; Sensô-ji is said to have been officially founded, and its construction completed, in 645. According to tradition, the peasants who discovered the statue were named Hinokuma no Hamanari and Takenari, and the one who made the statue a public object of worship, Haji no Matsuchi. These three figures are enshrined and worshiped at Asakusa Shrine, a Shinto shrine on the grounds of the temple.

Sensô-ji was later restored and re-established in the Heian period by Ennin.

As the area first became more densely built-up and developed into a city at the beginning of the Edo period, Sensô-ji served an important spiritual function, as the chief temple defending the city from evil spiritual energies said to come from the northeast (the so-called kimon or "Demon's Gate"). It is a temple of great importance to both high and low, serving as a tutelary temple of the Tokugawa clan, and unofficially as the chief temple of the Yoshiwara community.

Sensô-ji was originally a Tendai sect temple, but in 1950 became the head of its own Shô-Kannon sect or school of Buddhism, with 25 branch temples and 18 subordinate shrines.

The temple is approached via Nakamise-dôri (仲見世通), a long street today lined with market stalls selling pseudo-traditional tourist goods such as folding fans, yukata, and costume geisha wigs, along with traditional sweets such as manju, and other non-traditional merchandise. The market extends on both sides to other streets running parallel to Nakamise-dôri. At the entrance to Nakamise-dôri (at the opposite end from the temple's main worship hall) is the famous Kaminarimon (雷門, "Thunder Gate"). The red gate with its large paper lantern is an extremely common sight in guidebooks, tourist pamphlets and the like; the lantern is red, and inscribed with "Kaminari mon" on the front, and "Fûraijinmon" (lit. "Wind and Thunder Gods Gate") on the reverse. The gate is said to date to 942, when it was first built by Taira no Kinmasa, and was originally located elsewhere, but was relocated to its current location in 1635 and rebuilt and expanded in 1649 by the Tokugawa shogunate. It has been destroyed time and again, as have most of the city's sights, and the current reconstructed version of the gate dates to 1960. The gate is more formally known as Fûraijin-mon ("Gate of the Wind and Thunder Gods"); installed inside the gate are statues of Raijin and Fûjin (Gods of Thunder and Wind) on the front, and Tenryû and Kinryû on the reverse.

Beyond the Kaminarimon is a large market area extending to the left and right of the central pedestrian path to the temple, known as Nakamise-dôri. This street leads directly to the second of the two major gates, the Hôzômon ("Treasure Store Gate"), which in turn opens up onto the chief central plaza of the temple, and the central worship hall. This plaza is flanked by two small buildings where omikuji, omamori, and the like are sold; a large incense burner sits in the middle of the plaza, issuing purifying smoke. Beyond this plaza is the main worship hall (hondô), where, supposedly, the Kannon statue retrieved so many centuries ago is still enshrined.

A five-story pagoda stands to the left of the main worship hall, across the plaza from where it stood historically, up until its destruction in 1945. The pagoda was first constructed in 942 by Taira no Kinmasa, along with the Kaminarimon. It was lost in fires, and rebuilt, on numerous occasions. One such rebuilding took place in 1648, under Tokugawa Iemitsu. During the Edo period, this 33-meter, five-story, wooden pagoda was considered one of the "four towers of Edo," along with pagodas at Yanaka Tennô-ji, Kan'ei-ji, and Zôjô-ji. The 1648 incarnation of the pagoda survived into the 20th century, being named a National Treasure in 1907 along with the temple's main hall. However, both were destroyed in 1945 along with much of the rest of the temple, and are no longer designated as such in their postwar reconstructed forms.[1]

Behind the central plaza, the temple complex opens up, incorporating a great number of small structures, sculptures, and greenery scattered across the grounds, including Asakusa Shrine, the main Shinto shrine protecting the temple.

One of the many tiny buildings on the temple grounds is the Yôgôdô, built in 1994, on the occasion of the 1200th anniversary of Ennin's birth; the Yôgôdô contains a statue of Kannon, and of twelve Buddhas, each associated with a different year in the zodiac cycle.

Another of these small sub-temples is called Zenidzuka Jizô-dô. It is said that a peasant family discovered a small hoard of kan'ei tsûhô coins, but, they feared that enjoying the benefits of this wealth without having worked for it would bring them misfortune, so they reburied the coins, and built this worship hall to the bodhisattva Jizô over the coin mound; it was rebuilt in 1964 after the temple's destruction in WWII.

A temple gate called Nitenmon is all that remains of a Tôshôgû that once stood within the grounds of Sensô-ji. Originally built in 1618, the Tôshôgû shrine was destroyed by fire in 1631 and 1642, but the gate survived intact. In the 19th century, a pair of 17th century statues from Kan'ei-ji, depicting Jikokuten and Zôchôten were installed within the gate, giving the gate its new name, Nitenmon ("two dieties gate"). The Nitenmon was declared a National Treasure in 1946, but was downgraded to an Important Cultural Property in 1950.

The temple grounds also include a Bentendô (Benten Hall), known as rônyo Benzaiten, or "old woman Benzaiten" for her white hair. It is counted as one of the Three Benten of the Kantô region, along with that of Enoshima, and one located in Kashiwa city, in Chiba prefecture; it is said that this particular Benten statue was worshipped strongly by the Hôjô clan of Odawara. A bronze bell housed within the Bentendô dates to 1692, after being recast when earlier bells were destroyed. Measuring 2.12 meters tall and 1.52 meters in diameter, it served as the main bell announcing the time for the Asakusa district, taking its cues from the Hongokuchô bell. The bell is immortalized in a haiku by Matsuo Bashô, and continues to be rung today, every morning at six o'clock, by one of the monks of Sensô-ji.

Another small hall on the grounds is called the Kume-no-Heinai-dô. Kume no Heinai (d.c. 1683) was a samurai who lived at the temple, performing devotions and Zen meditation, praying for the souls of those he killed in swordfighting duels. It is said that before he died he asked his followers to carve a statue of him and bury it near one of the gates to the temple, so that countless people would step on it, helping to expiate the sins of his life. The statue was eventually recovered and enshrined within a hall on the temple grounds, where for some reason it came to be worshipped as a deity for a good marriage. The hall was destroyed in 1945, and rebuilt in 1978.

A pair of bronze bodhisattva statues just to the right of the central plaza depict Kannon and Seishi. They date to 1687, when it is said they were donated by a Takase Zenbee from what is today Gunma prefecture, in thanks for the help he received from a rice broker's family.

Another famous bronze sculpture on the grounds depicts Ichikawa Danjûrô IX, one of the most famous and popular kabuki actors of the Meiji period.

A hall known as the Komagata-dô was erected in 942 a short distance from the temple, on the river banks adjacent to Azuma-bashi, at the supposed site of the original, ancient, discovery of the Kannon figure. Traditionally, those coming to Sensô-ji on pilgrimage would stop and pray here first. The Komagata-dô was most recently rebuilt in 2003.