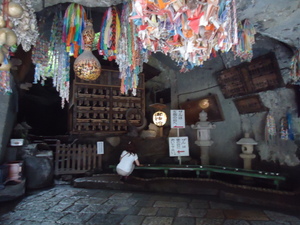 Zeni-arai Benten is a Shinto shrine in Kamakura dedicated to Benten. It is one of three Benten shrines in the area to claim inclusion in the Seven Lucky Gods of Kamakura. The shrine is located in a cave where a spring naturally emerges from the mountain, and is accessed via a tunnel carved straight through the side of the mountain.

The shrine got its start at the end of the Heian period, when Minamoto no Yoritomo prayed there for the safety and recovery of the people of Kamakura, who had been suffering from one disaster after another. Yoritomo is said to have had a dream at the Hour of the Serpent, on the Day of the Serpent, in the Month of the Serpent, in a Year of the Serpent (1185), in which Uga-fukujin appeared to him and suggested that if he performed a ritual at the spot where water gushes forth, peace and tranquility would come to the realm. Thus, Yoritomo established a shrine to Uga-fukujin, and it is said it played a role in bringing order to the realm afterwards. (That year, 1185, had seen the end of the Genpei Wars, the rise of the Minamoto clan, and the fall of its chief rivals, the Taira clan.)

At some point, the legend arose that money washed at the shrine would double in value, giving the shrine its common name of 'zeni-arai' ("money-washing") Benten. The spring at the shrine is one of five famous waters in the city.