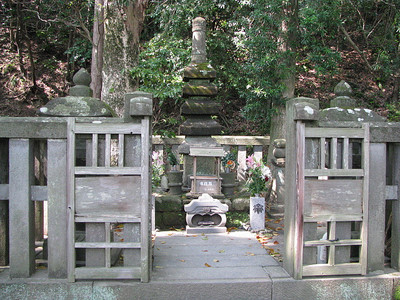 The grave of Minamoto no Yoritomo in Kamakura.

Yoritomo was the son of Minamoto no Yoshitomo. The Minamoto clan (Genji clan), a major military family, frequently clashed with the Taira clan (Heike clan), the other major military family, in the 12th century. In the Heiji Rebellion of 1159, Yoritomo was captured and his father was killed. As he was just a child he was exiled to Izu province. He married Hôjô Masako, a woman from an important local family. (After the death of Yoritomo, her family controlled the shogunate.) In 1180 he obtained an order from Prince Mochihito 以仁王, a son of Emperor Go-Shirakawa, ordering him to raise troops and chastise the Taira. He called the Minamoto to his banner and established himself in Kamakura in the Kanto. The men who came to him were called his "house men" (gokenin 御家人), and they were in effect retainers, or vassals, who owed loyalty directly to him. Even that year he set up a Board of Retainers (samurai dokoro 侍所) to control his retainers.

In this, the Genpei 源平 War Yoritomo sent armies against the Taira headed by his cousin Minamoto no Yoshinaka (Kiso Yoshinaka) and his younger brother Minamoto no Yoshitsune. (The story of the relationship between the brothers is one of the most famous in Japanese history.) They were successful in defeating the Taira, but part way through Yoritomo ordered Yoshitsune to destroy Yoshinaka on the grounds that his troops were misbehaving in Kyoto. By this victory, Yoritomo effectively controlled most of the country. Probably remembering his own history, he made sure (almost) none of the Heike survived.

In 1185 ordered Yoshitsune's arrest on the grounds he had received favors directly from the court, though he was a retainer of his brother. When Yoshitsune fled with a handful of men, Yoritomo ordered a massive manhunt for him throughout the whole country. At that time most of the country was divided into estates which were the source of revenue for the central government (kôryô 公領) or, especially, private individuals (shôen 荘園). To make it possible for him to find these few people, Yoritomo obtained an imperial receipt that allowed him to place his own retainers as stewards (jitô 地頭) in most of the estates, giving him effective control over most of the land in the country. He also levied a small tax (hyôrômai 兵糧毎) on estates of all categories, including "tax free" estates. He also placed "protectors" (shugo 守護) in each province to ferret out evildoers. (These shugo were the forerunners of the daimyo.) Yoshitsune, who had sought refuge with the Fujiwara of Mutsu province was killed by Fujiwara no Yasuhira in 1189, but despite this Yoritomo attacked and conquered the province later that year, extending his rule over this northern territory also.

Yoritomo did not take over the imperial government, but it gave him authority for his doing whatever he wanted to do, and his government through control of his own retainers was the only effective government in Japan. His Board of Inquiry (monchûjo 問注所), which had a pretty good reputation for fairness, was used and accepted by even those not his retainers.

Yoritomo accepted a number of comparatively low court ranks, including that of "Barbarian-expelling Generalissimo" Seii Tai Shogun 征夷大将軍 (1192). By this he was formally delegated with the emperor's military authority.

Following his death, Yoritomo was succeeded by his eldest son Minamoto no Yoriie, who in turn was succeeded as shogun by Yoritomo's second son Minamoto no Sanetomo. Yoritomo was buried at the foot of Ôkura-yama in Kamakura, with the graves of Shimazu Tadahisa, Môri Suemitsu, and Ôe no Hiromoto nearby. By the Edo period, the gravesite had fallen into ruin, and was restored by the Shimazu clan, who have recently (in the Heisei period) replaced the tombstone once again.[1]