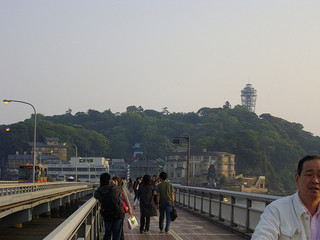 Enoshima as seen from the bridge approaching it.

Enoshima is an island off the coast of the city of Fujisawa, a short distance from Kamakura. The island is the home of a shrine to Benten, counted among the Seven Lucky Gods of Kamakura, and among the Three Benten Shrines of the Kantô.

The legend of the island's origin revolves around an angry five-headed dragon, who lived in a bottomless lake, and who kidnapped children. Its rumblings created terrible storms, and the people feared the dragon very much. But, then, an island appeared, and a heavenly maiden, the goddess Benten. The dragon fell in love with the goddess, and asked for her hand; she refused him initially, but once he mended his ways, she agreed, and the two were wed. Thus Benten became associated with the dragon (though this sometimes appears as a white snake).

Much of the island was purchased in 1880 by British merchant Samuel Cocking, who built a villa and extensive botanical gardens there. He also took action to defend the island's Buddhist temples from the Meiji government's anti-Buddhist policies. 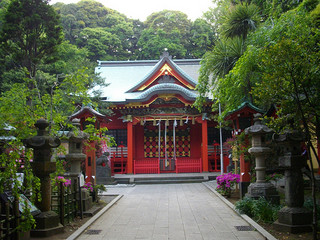 One of the worship halls at Enoshima Benten Shrine.

The island is approached via a single bridge, which leads up through a shopping street, and then to a tall set of stairs leading to the Benten Shrine at the center and top of the mountain. Stairs and pathways lead around the remainder of the island, which includes inns, restaurants, shops, and homes, and eventually to an end, at which point one must turn around and walk all the paths and stairs again in order to return to the bridge, and to leave the island. The paths may have once led around the island in a more convenient manner, but in the 1923 Great Kantô Earthquake, some sections of the island fell off into the sea, changing the shape of the cliffs, and cutting off that section of the paths.

These three shrines were guarded by three temples, called Iwamoto-bô, Kamino-bô, and Shimono-bô. The Iwamoto-bô was later renamed Iwamoto-in, and came to be the lead temple for the entire island. Later still, it became an inn, the Iwamoto-rô. The popular kabuki character Benten Kozô Kikunosuke is said to have been based on a servant who worked there.

One of the many stone torii on the island is said to have been donated by Minamoto no Yoritomo, who asked the prominent Buddhist monk Mongaku to travel to Enoshima in 1182 to pray to Benten for a curse upon his enemy, Fujiwara no Hidehira.

A famous stone on the island, known as the Turtle Stone for its remarkable resemblance to a turtle's shell, is said to be one of the Four Famous Stones of Kamakura.

In addition to the Benten Shrine, the island also houses a Ryûgû (Dragon Palace) Shrine; and the Buddhist temple Saifuku-ji, which contains the largest indoor statue of Fudô-myôô in the country.

A bell known as the Dragon's Love Bell (ryûren no kane), and resembling that of a Western-style ship, stands atop the mountain; ringing it is associated with success and happiness for romantic couples' relationships.