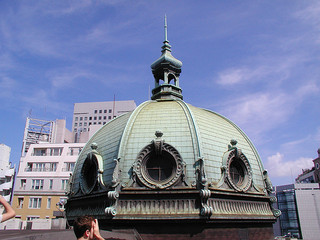 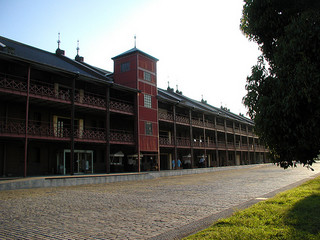 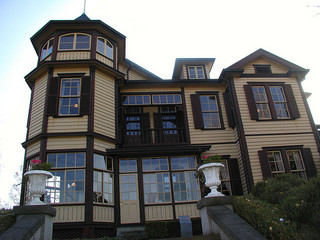 A former residence of diplomat Uchida Sadatsuchi, re-erected in the 1990s on the 1880s site of the Italian consulate in Yokohama's Yamate Bluff neighborhood. 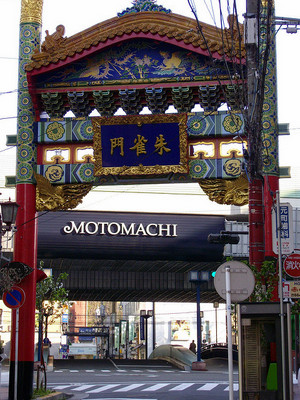 One of the gates of Yokohama Chinatown, with the European-influenced neighborhood of Motomachi just beyond

Yokohama is a major port city in Kanagawa prefecture, just southwest of Tokyo and north of Kamakura and the Miura Peninsula. Along with Osaka, it is one of Japan's largest cities.[1]

In terms of historical significance, Yokohama is chiefly known as one of Japan's most major treaty ports in the Bakumatsu and Meiji periods, and a major center of Western settlement and activity during those periods. As such it was the site of numerous key events of the late 19th century pertaining to interactions with Westerners and the West; further, a great many notable historical figures traveled via Yokohama, including numerous visiting foreign heads of state who entered Japan at Yokohama, and notable Japanese who departed the country from Yokohama.

Yokohama was officially opened to Western settlement and trade on 1859/6/2 (July 1), along with Nagasaki, following a series of Treaties of Amity & Commerce signed with the United States, the Netherlands, the United Kingdom, Russia, and France in the preceding years. Though the treaties originally specified Kanagawa-juku along the Tôkaidô Highway as one of the treaty ports, Tairô Ii Naosuke managed to arrange for the fishing village of Yokohama to be opened instead, keeping the new center of foreign settlement slightly removed from major centers of Japanese activity.[2] Foreigners were permitted by the treaty to move freely within a 25 km radius, but even so, the Tokugawa shogunate took efforts to isolate them from broader Japanese society, and to a certain extent from interaction or interference with traffic along the Tôkaidô. This would serve both the pragmatic effect of keeping them from interfering with anything serious, but also the symbolic effect of showing, or suggesting, that the social and political situation in Japan overall had not changed so dramatically. Some scholars have suggested that, at least initially, there was an idea that the Westerners could be restricted to Yokohama as the Dutch had been to Dejima, and that outside of these few treaty concessions Japan for the most part remained under "maritime restrictions" and continued on as before.[3] Nevertheless, the fishing village developed practically overnight into one of Japan's most major port cities, and the country's chief site of Western settlement; numerous US and European businesses, legations, churches, schools, and other institutions were established, and formed the core of the city. Before long, the city also became home to numerous significant Japanese-run businesses and other modern institutions, including Hara Zenzaburô's Yokohama Raw Silk Revised Company, the Japan Shipping Company (Nihon yûsen kaisha or NYK), and the Yokohama Specie Bank.[4]

The Western settlements enjoyed extraterritoriality into the early years of the 20th century, and operated to a certain extent as separate enclaves unto themselves. Still, the Tokugawa shogunate (and the Meiji government which succeeded it) maintained offices such as a National Prosperity Development Office in the city, to help oversee and manage commerce and other matters.[5]

The Western presence brought commercial growth and cultural interaction, but considerable tension as well. After British merchant Charles Richardson was killed on 1862/8/21 for obstructing a Shimazu clan procession at Namamugi (on the outskirts of Yokohama), anti-foreign groups burned down the British Legation.

The first Catholic church to be erected in Japan following the lifting of Tokugawa bans on Christianity was established in Yokohama in 1861. Though known officially as Eglise du Sacre-Couer (Church of Sacred Heart), it was commonly known as Yokohama Tenshudô (Yokohama Hall of the Heavenly Lord).

The port was briefly closed in the spring and summer of 1864 in connection with political instabilities and tensions, but it was reopened in the 9th month that year.

The first modern ironworks in Japan was established in Yokohama in 1865.

The Butaya fire destroyed sections of the city in 1866, spreading initially from a fire which started in the city's Miyozaki pleasure district on 1866/10/26.

Yokohama became home to one of Japan's first railroad stations in 1872, as the first railroad line in the country was opened between Shinagawa (in Tokyo) and Yokohama. That same year, the Asiatic Society of Japan (a scholarly association of Western scholars interested in Asian Studies) was established in the city, and a diplomatic incident erupted when a number of Chinese workers arriving aboard a Peruvian ship claimed they were suffering mistreatment and sought aid from Japanese authorities. A railroad spur was extended from Yokohama Station out to the newly-built red-brick warehouses at the port in 1911-1913, expanding the station's prominence as a through-point for freight transport; in 1915, however, a new Yokohama Station was built elsewhere to serve as the new central hub for the city, and the original Yokohama Station was renamed Sakuragichô Station. Sakuragichô serves today as the gateway to the neighborhood of Minato Mirai (lit. "Port of the Future"), an area built on reclaimed land in the 1980s and home, chiefly, to shopping centers, businesses, hotels, conference centers, and the Yokohama Museum of Art.