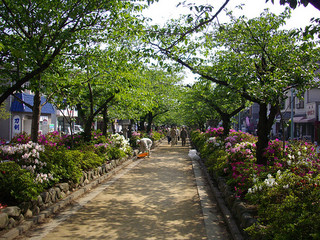 Wakamiya-ôji is a major road in Kamakura, which runs from the beach at Sagami Bay, almost stick-straight in a north-northeast direction through the city, to the main entrance of the major Shinto shrine Tsurugaoka Hachimangû.

The road was originally built in the late 12th century, in conjunction with the opening of the Kamakura shogunate, and named after the shogun's young son Yoriie ("wakamiya" means "young prince"). It forms the center of Kamakura's road network and city plan, and a section between two torii leading to the shrine, and marked with a pair of stone lion-dogs at the entrance, is lined with cherry trees.