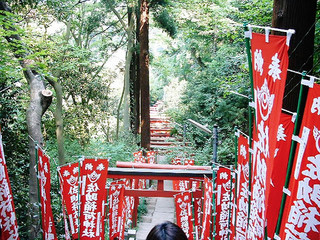 Sasuke Inari is a Shinto shrine in Kamakura dedicated to Inari, kami of rice.

It is said that when Minamoto no Yoritomo was in Izu, the god of rice appeared to him in a dream, telling him "the time to destroy the Heike is now!", and that he couldn't lose. Yoritomo began raising an army on 1180/8/17, and five years later had decisively defeated the Heike. As a means of showing his gratitude, in 1190, Yoritomo ordered Hatakeyama Shigetada to establish a shrine on this site.

The shrine is known for its long lanes of numerous vermillion torii.