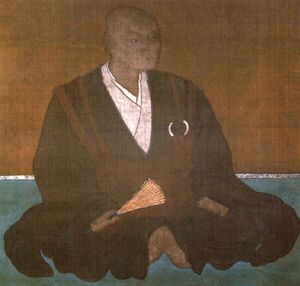 Mystery surrounds the early life of Hôjô Soun. Historical records differ, some seem to show evidence that he was a native of Kyoto, namely the Ise Keizu, where others give evidence that he was from Bitchu province (The Bitchu Heiranki), and yet others point to his coming from Ise province. Regardless, with so many unclear and conflicting sources, it appears that the true origins of Hôjô Soun will remain a mystery.

Soun was known during his life as Ise Shinkuro, as well as Ise Shozui and Ise Nagauji and is generally known to us as Hôjô Soun (for the sake of clarity, Ise Shinkuro will be used in this description.) He was taught by monks from the Daitoku-ji and fled the capital during the Onin War (1467-1477). He traveled to Suruga with six followers and became a retainer of his brother -in-law, Imagawa Yoshitada. Yoshitada was killed in battle in 1476, and Ise, considered an objective outsider, was instrumental in solving the resulting succession dispute between Yoshitada's son Ujichika, who was only 6 years old at the time, and Yoshitada's cousin, Oshika Norimitsu. The peace, however, was only temporary, and when Norimitsu again tried to seize control from Ujichika, Ise stepped in again, this time killing Norimitsu in 1487. Ujichika expressed his gratitude by giving his uncle Kokokuji Castle and allowing him to expand his retainer band and use the character for 'Uji' in his name. Ise then adopted the name Nagauji.

The Conquest of Izu

In 1449, Ashikaga Shigeuji had become the Kanto Kubo, a post which in theory made him the voice of Ashikaga authority in the Eastern Provinces. In fact, the power of his post had waned. Shigeuji attempted to reverse this and his first move was to kill his deputy, Uesugi Noritada. This touched off a general war between Shigeuji and the two branches of the powerful Uesugi family (the Yamanouchi and Ogigayatsu). Various other clans became involved in the long struggle and in 1455 Imagawa Noritada threw in with the Uesugi and contributed to their cause by capturing and burning Kamakura. Shigeuji thereafter resided in Shimosa Province. Afterwards, the government in Kyoto dispatched Ashikaga Masatomo as the new Kanto Kubo. Conditions in Kamakura and its environs were so unfavorable, however, that Masatomo elected to take up in Izu Province at Horigoe castle (he was thusly known as the Horigoe Kubo.) In 1491, Masatomo died. His elder son, known to us only as Chachamaru, had been passed over as heir-apparent by a younger half-brother, Jundouji. Chachamaru seized power and in the course of so doing had Jundouji and his mother (or mother-in-law) killed, and became Kamakura Kubo (Some sources claim that Masatomo had somehow been done in by Chachamaru as well). Not satisfied that his position was now secure, Chachamaru began killing off former supporters of Jundouji. By 1493 Izu Province was descending into civil war, with outside lords taking an active interest in the proceedings. At this time, Jundouji's older brother, Ashikaga Yoshizumi, took control in Kyoto in a coup, becoming the 11th Ashikaga Shogun. This weakened the position of the already widely despised Chachamaru even further. Just across the border at Kokokuji castle, Ise Nagauji discerned an obvious opportunity to increase his own position. Supported by the Imagawa, Ise invaded and took Izu in a brisk campaign, forcing Chachamaru to flee to Kai Province. In point of fact, sources actually conflict on the year of Nagauji's invasion, with many older descriptions claiming 1491. Relatively newer studies place Ise's campaign in 1493, at the time of Yoshizumi's ascendency to Shogun. Whatever the case, the ranks of Ise's band were swelled by former Ashikaga retainers. After this point, Ise enjoyed at first de facto and then official independence from the Imagawa.

As for Chachamaru, he was later attacked and killed by Nagauji, apparently in 1498. Just how this was accomplished is unclear. 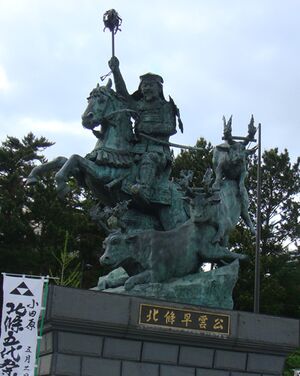 In 1494, the deaths of two powerful forces in the Kanto, Ogigayatsu-Uesugi Sadamasa, and the lord of Odawara castle, Omori Ujiyori, gave Ise an opportunity in Sagami Province that he was more than ready to grasp. Omori Ujiyori, an important Uesugi vassal, died on the 5th day of the 10th month, and was succeeded by his son Fujiyori, and by then Sadamasa was dead as well. Omori Fujiyori thus lost not just his father, but also his powerful overlord. Ise was quick to avail himself of this new opportunity. He presented himself to the young lord of Odawara as a friend and father figure, bringing him such expensive gifts as his treasury would allow. In 1495 (the 11th or 16th day of the second month, sources differ on the exact date), Nagauji used a large deer hunt as an excuse to bring his soldiers deep into Omori territory. He captured the castle quickly in a move completely unexpected by Fujiyori, and Fujiyori was left with no option but to flee[1]. The Omori took up at Okazaki and Sanada castles and in time became Hôjô vassals. Another version of events, certainly a fable, is that Nagauji took Fujiyori on the deer hunt, and by the end of the day, Fujiyori was dead, and Odawara was in the hands of Hôjô Nagauji. In any event, Odawara would be continually upgraded over the following decades until it stood as one of the most formidable strongholds in all of Japan.

Ise turned over Odawara to his brother Yajirô and returned to Nirayama, his home castle in Izu. The following year, Yamanouchi-Uesugi Akisada invaded Sagami. Ise joined a coalition of Sagami lords that included Omori Fujiyori, the Ota, the Muira, and the Ueda. Yet this allied army was crushed on the battlefield by Akisada and Ise lost many of his retainers. In 1504 Ise had sufficiently recovered to send an army to support Ogigayatsu-Uesugi Tomoyoshi against the Yamanouchi at Tachikawa in Musashi Province.

In 1512 Ise attacked the neighboring Miura clan. He brought down Okazaki Castle and forced Miura Yoshiatsu to westward to Muira castle. Kamakura then fell to the Ise. Shinkuro now consolidated his gains. He sent troops to the Taima Post Station (present-day Sagamihara City), a strategic location since it dominated the crossroads of Sagami, Musashi, and Kai Provinces. He also threw up a castle at Tamawara to counter the movements of the Ota, who were Muira allies. In fact, Ota Sukeyasu did lead a relief army to aid the Muira but was attacked by the Ise en route. The Ota were routed and Sukeyasu was killed.

Apart from his military moves, Shinkuro attempted to demonstrate that he was the new lord of Kamakura in other ways, chiefly, by being a benefactor. He granted tax exemptions to the Kenchouji, Engakuji, and Toukeiji temples, setting a precedent future Hôjô lords would emulate. The siege of the Muira lasted until the 7th month of 1516, when the Ise were finally able to bring down Arai Castle. Miura Yoshiatsu and Muira Yoshimoto committed suicide.

Already, Shinkuro had officially retired in favor of his son Ujitsuna and in 1519 he passed away. In his memory, Ujitsuna built the Sounji in Sagami, an act that impressed the Hôjô retainers.

In addition to his political and military skill, Shinkuro was a gifted administrator, and earned the good will of the peasants in his land by lowering taxes to forty percent (down from as much as seventy percent). He is perhaps best known for composing the Soun-ji Dono Nijuichi Kajo, or 'Lord Soun's Twenty-one Articles', a collection of do's and don'ts intended for future retainers of the Hôjô house. Many scholars mark the year Soun conquered Izu as the opening of the Sengoku period, and Soun himself as one of the first and best examples of "gekokujo" (the weak overcoming the strong) in action, for Soun, a relative unknown, was able to take a province for his own without an Imperial decree or permission from the Shôgun.

Although Ise is remembered as Hôjô Soun, it is almost certain that he never used the name 'Hôjô' in his life, that creative tag being adopted by Ujitsuna in 1523 or 1524.