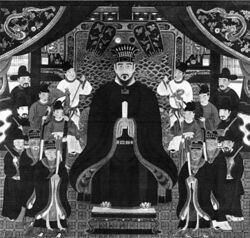 Shô Nei was king of the Kingdom of Ryûkyû from 1587–1620. He reigned during the 1609 invasion of Ryûkyû and was the first king of Ryûkyû to be a vassal to the Shimazu clan of Satsuma han.

Being a direct descendant of Shô Ikô, who Shô Shin worked to eliminate from the royal lineage, Shô Nei's accession to the throne inspired some considerable conflict at court. The circumstances surrounding his accession remain murky to historians still today, as he took the throne despite his predecessor, Shô Ei, having a younger brother, Shô Kyû, who we might typically expect should have been next in the line of succession. Some historians have suggested that Shô Nei may have come to the throne due to factionalism at court, with an anti-Shimazu faction supporting Shô Nei against the pro-Shimazu policies of Shô Ei.[2]

The Kyûyô suggests there was outright armed revolt against his taking the throne. According to that text, in 1592 Shô Nei responded to the uprising by dispatching Ikegusuku Anrai (Mô Hôgi) and Mabuni Ankô (Kin Ôshô) to head a force to attack "the Jana family of Shuri Saishû." It is unclear exactly who, or where, this family was, but the kingdom's forces attacked the home with Chinese-style gunpowder weapons known as hyaa ("fire arrows") and ultimately defeated the Jana family forces.[3]

Meanwhile, Japanese warlord Toyotomi Hideyoshi planned an invasion of Korea. Through messengers from Satsuma, he ordered in 1591 that the kingdom contribute warriors and food supplies to the invasion efforts; he also commanded that Ryûkyû temporarily suspend its official missions to China. The next scheduled tribute mission traveled to Beijing later that same year anyway, and related Hideyoshi's plans to Chinese Court officials in Fujian province, if not in Beijing as well. A short while later, Shô Nei sent a missive to Hideyoshi, as was customary upon the installation of a new ruler. He formally congratulated Hideyoshi on having taken over Japan, and on bringing peace and prosperity to the realm, and sent along with the missive a gift of Ming lacquerware. The letter referred to Ryûkyû as a "small and humble island kingdom [which], because of its great distance and because of lack of funds, has not rendered due reverence to you."[4] Shimazu Yoshihisa, lord of Satsuma, then suggested that Ryûkyû be allowed to supply food and other supplies instead of manpower. Hideyoshi accepted this proposal, but Shô Nei sent supplies only at a later time, sending some food supplies in early 1593, and the rest that summer; Shimazu forces in Korea meanwhile suffered from a lack of supplies.[5]

Amidst these circumstances, Beijing became wary regarding Ryûkyû's connections, and when Shô Nei finally requested investiture in 1595 (explaining that he had delayed in requesting investiture because the kingdom was being obliged to contribute to this military escapade and therefore could not afford the extravagant costs of hosting investiture envoys), the Ming, wary of issues of maritime security and other concerns, suggested that investiture be performed by proxy, with a royal envoy traveling from Ryûkyû to Fujian for the ceremony. However, given Shô Nei's issues with legitimacy within Ryûkyû, he insisted on the investiture ceremonies being performed in Shuri as usual. Ultimately, they were delayed until 1606.[6]

Ryûkyû continued to inform Beijing about Hideyoshi's second planned invasion of Korea in 1597, and of Hideyoshi's death in 1598. The following year, court official Jana Teidô traveled to China to officially request investiture for Shô Nei, but he (perhaps knowingly) failed to bring the necessary documents proving Shô Nei's legitimacy. Another official, Sai Kei, was then dispatched in 1601 to request investiture again, and after rejecting a suggestion that Ming martial officials be sent to perform the ceremony, Sai managed to convince the Ming court to agree to send civil officials as per usual.[6]

Following Tokugawa Ieyasu's subsequent rise to power, Shô Nei was asked by Satsuma to formally submit to the new shogunate. Shô Nei continued to resist, or to delay, as he had with Hideyoshi's demands as well.

Satsuma invaded Ryûkyû in the beginning of 1609, and Shô Nei surrendered on the fifth day of the fourth lunar month[7]. Shô Nei was taken, along with a number of his officials, to Sunpu to meet with the retired Shogun Tokugawa Ieyasu,[8], to whom he presented a number of gifts. At that same meeting, Ieyasu bestowed honors on Shimazu Iehisa in recognition of his successful conquest. Shô Nei and Iehisa met with Ieyasu again a week or so later, for a banquet and sarugaku performance at Sunpu castle.[9]

Shô Nei was then taken to Edo for a formal audience with Shogun Tokugawa Hidetada, before returning to Kagoshima, where he was forced to formally surrender and to declare a number of oaths to the Shimazu clan. At Edo, the shogun stated that Shô Nei should be allowed to remain in power due to the long history of his line's rule over the islands[7].

This marked the first time the ruler of a foreign country had come to Japan[10], and Shimazu Tadatsune, the lord of Satsuma, made sure to take advantage of the political value of the occasion for himself. His successors would continue to make use of their status as the only daimyô to have a foreign king as a vassal to secure for themselves greater political privileges, stipends, and court ranking. In 1611, two years after the invasion, the king returned to his castle at Shuri once Tadatsune and his advisors were satisfied that he would uphold the oaths he had sworn.

Though Satsuma initially exercised a strong hand in declaring policy in Ryûkyû, and purging the royal government of those perceived as disloyal to Satsuma, by 1616 this approach came to an end[7]. "Japanization" measures were reversed, at the request of Satsuma, and Shô Nei was once more formally granted primacy over his kingdom. For the remainder of his reign, Shô Nei would continue to bear all the trappings of royal authority, and exercised great power over his domain within the frameworks set by Satsuma.

Upon his death, Shô Nei was buried not in the royal mausoleum at Shuri, but rather at Urasoe yôdore (the mausoleum of several 13th-14th century rulers of the earlier Chûzan Kingdom). Popular belief says this is because he felt that by succumbing to Satsuma's invasion, he had deeply dishonored himself before his ancestors, and was unfit to be buried with them. However, Shô Nei was originally from Urasoe, so a more mundane explanation may be the truer one.

Shô Nei was forced to swear a number of oaths during his time in Kagoshima[11], as he and his kingdom were formally made vassals to the Shimazu clan. The so-called Fifteen Injunctions (掟十五ヶ条, Okite jûgo-ka-jô) were among the most major, and primarily involved political and diplomatic matters. These stated, among other stipulations, that Ryûkyû would not engage in trade or diplomatic relations with foreign states without the consent of Satsuma. These policies, along with maritime restrictions and other stipulations, would govern Ryûkyû's domestic situation and foreign relations for over 250 years.

Shô Nei and the members of his Council of Three were also required to swear that the kingdom had long been a dependency of Satsuma (a falsehood), and that they acknowledged that their failure in recent years to live up to their obligations to Satsuma had brought this invasion, a punitive measure, upon themselves. The oath went on to acknowledge the benevolence of Satsuma in allowing the king and his councillors to return to their kingdom, and to continue to rule. Shô Nei swore to pass on these oaths to his descendants, further ensuring the relative permanence of the vassal-lord relationship into which Ryûkyû had been entered with Satsuma.[12]