The Kingdom of Ryûkyû is known to have possessed firearms as early as the 1450s, if not earlier. They used a variety of gunpowder hand-weapons and cannon obtained from the Chinese, known as hyaa or by a variety of closely related terms, but the Ryukyuans did not make extensive use of European-style arquebuses or cannon.

It is unclear if firearms were used as weapons, in battle, in the 15th century, or only as devices for use in royal processions and festivals, a role akin to fireworks or a "gun salute." In the 16th century, however, it is presumed that the royal army made use of Chinese-style firearms, though these were rendered obsolete by the introduction of European-style matchlocks. Though the Ryukyuans made extensive use of Chinese-style firearms in their defense against the invasion by Satsuma han samurai in 1609, this equipment was proven sorely inferior to the European-style weapons used by the invaders. 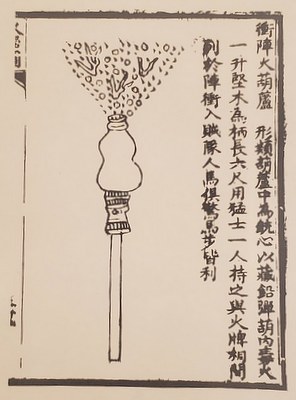 It is not clear exactly when firearms were introduced to Ryûkyû, but it is known that Ryûkyû enjoyed extensive trade with China, including trade in weapons, up until the 1450s, when a ban was placed on Fujian merchants selling weapons overseas, as these were needed to defend the coasts against wakô raids. It is believed that gunpowder and firearms were first introduced to Ryûkyû from China, through this trade, though the Chinese Court had officially forbidden selling sulphur, or saltpeter (ingredients for making gunpowder) or gunpowder itself, overseas.[1] The fact that Ryûkyû obtained weapons and gunpowder despite both of these bans is evidence that the China-Ryûkyû trade consisted not solely of the official tribute trade, but extended to smuggling as well. Ryûkyû had no need to trade for sulphur, though, at least, since the kingdom had a supply from Iôtorishima, a small island near Tokunoshima; in fact, sulphur was something Ryûkyû frequently sent overseas in exchange for other goods, and there was even a so-called Iô gusuku ("sulphur warehouse") in Naha harbor expressly for the purpose of storing the material imported from Iôtorishima.[2]

One of the earliest references to firearms in Ryûkyû is from the Annals of the Joseon Dynasty, dated to 1453. According to that record, in 1450, a number of Koreans were shipwrecked on the island of Gajashima, in the Tokara islands, which were claimed by both Ryûkyû and Satsuma. They were brought to Okinawa Island, and were granted an audience with King Shô Kinpuku, at which time a sort of "fire pipe" (火筒) was demonstrated for them, and they were instructed in its use. It is believed that this "fire pipe" was little different from the so-called "hand cannons" or "bird guns" which we see discussed more broadly, in Korea, China, and Japan as well, down into the 16th-17th centuries;[3] Another record, written by members of a party of Koreans shipwrecked in Ryûkyû in 1462, indicates that the "fire pipes" they saw in Ryûkyû were of the same type, size, and form as those they were familiar with in Korea.[1]

Historian Uezato Takashi points out that these episodes strongly imply that Ryûkyû already by this time had its own firearms experts, and was not merely relying upon imports from China, and Chinese experts.[3]

The European arquebus, introduced to Japan in 1543, never caught on in Ryûkyû, and the gunpowder weapons used throughout the 15th-16th centuries were adapted from Chinese technology. Known as hyaa (火矢), or "fire arrows,"[4] they had short barrels, and essentially consisted of short, slightly conical iron tubes attached to wooden shafts. Some, called sanganjû in Japanese, had three barrels, held together with a strip of metal wrapped around the three like a belt. The weapon was held under the left arm while the right hand was used to light it. The Japanese made use of such weapons as well, as late as in the 1548 battle of Uedahara, but the superior European-style arquebus became more widely used after that.[5] The sanganjû may have appeared in Ryûkyû as early as the 1450s, but is known from records to have at the very least been in use by the 1550s; similar weapons with four, seven, or even ten barrels are mentioned in a document from 1546.[6]

A Ryukyuan envoy in 1466 demonstrated Chinese-style firearms before the Ashikaga shogun and his court; Stephen Turnbull describes this as the first gunpowder explosion to occur in Japan since the Mongol invasions,[7] when the Mongols made use of a sort of grenade or bomb. Various records seem to imply that gun salutes came to be typical in Ryûkyû on certain occasions, such as when the king departed the palace on a journey.[8] Still used today at certain festivals, such as the Naha Tug-of-War, devices used for salutes are comprised of a triple barrel, each roughly 3cm in diameter and 20cm in length, attached to a long 180cm oak haft. These are also called hiyaa or hyaa, but the character bô, meaning rod or pole, is inserted, unpronounced, before those meaning "fire arrow."[9]

As there are no documents explicitly saying so, it is difficult to know if firearms were used as weapons, in battle, in the 15th century. However, Uezato points out that there were certainly conflicts in which they might, hypothetically, have been used, including an expedition to Kikai-ga-shima in 1450, succession disputes in 1453, and the Gosamaru-Amawari Incident of 1458.[9] Metal and stone rounds have been found in archaeological excavations at the site of Gosamaru's castle, Nakagusuku gusuku.[10]

The early Korean records allude to the presence of Ryukyuan officials within the government tasked with being in charge of firearms, but it is unclear if indeed such a post or position existed at the time. The Ryûkyû-koku yuraiki indicates a "head of production of firearms / fire arrows" (O: hyaa shii du peechin) named Matsuuji (in the Japanese reading of the name) who is held to have introduced fireworks to Ryûkyû in 1479, so such a position seems to have been in place at that time. Furthermore, an official known as the boraakugami bugyô is known to have had gunpowder technology among his responsibilities.[11]

By the end of the 16th century, these Chinese-style weapons were used extensively. It is believed that the technology, and the form of the devices, may not have changed very much. The simple addition of metal rounds, that is, ammunition, where previously gunpowder was used alone, converted devices which produced only light, sound, and heat (flame, sparks, explosions) for salutes and the like into weapons.[12] Such "hand cannon" ammunition has been found in excavations at a great many sites, including Shuri castle, Nakijin gusuku, Goeku gusuku, Tonakijima[13], Katsuren gusuku, Itokazu gusuku, and Ufu gusuku. Ranging from the 14th to 16th century, the rounds vary greatly in size and material. Materials used included stone, earth, iron, and bronze, and the rounds found range from one to two centimeters in diameter to more than ten centimeters.[12]

A 1605 royal government record lists in detail the Ryukyuan military's equipment, including yumi (bows), hako (pikes or halberds), and swords, along with "two hundred guns big and small," gunpowder, and ammunition. It is unclear exactly what type of weapons these are.[14] There is no explicit evidence that European-style matchlocks were used in Ryûkyû at this time, but Uezato argues that given the state of affairs in the region at the time, it should not be considered unlikely that European-style firearms would have been introduced to Ryûkyû already by this time. The writings of Fernaõ Mendes Pinto, written in the 1560s, mention that there were more than 300,000 arquebuses in Japan at that time (though whether this number can be trusted is another matter), and touch upon trade with Ryûkyû, seeming to indicate that matchlocks would have been introduced to Ryûkyû as well. Uezato is careful, however, to point out that we cannot definitively say that they were introduced.[15]

In addition to wielding inferior weapons compared to the European-style matchlocks used by the Satsuma invaders, Turnbull surmises that techniques of firing in volleys were unfamiliar in Ryûkyû, contributing to their unpreparedness.[5]

Ryûkyû also made use of a form of cannon called ishibiya and closely related to the "hand cannon" or hyaa. The term ishibiya later came to refer specifically to those which fired shots of one kanme in weight (3.75kg) or heavier. Ammunition of this type has been found in excavations at Shuri castle. Cannon were also mounted at Mie and Yarazamori gusuku which defended the port of Naha and were used against Satsuma ships in 1609[5], and fortresses such as Nakijin gusuku in the north of Okinawa island were definitively equipped with gunports.[16] None of these survive today, so it is difficult to know exactly what they were like, but if we surmise based on what other peoples in the region were using, it was most likely a muzzle-loading weapon, with some direct application of fire to ignite the device.[17]