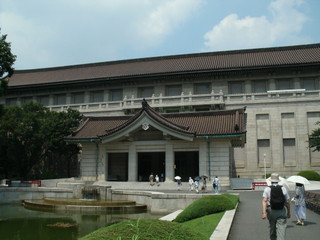 The second Honkan (Main Building) of the museum, built in 1938 in a Meiji-inspired style. 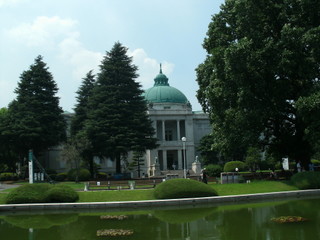 The Hyôkeikan, completed in 1909, survived both the 1923 Great Kantô Earthquake and the 1945 bombings intact.

The Tokyo National Museum, located in Ueno Park and first founded as the Tokyo Imperial or Imperial Household Museum, is one of four top-tier national museums in Japan, along with museums located in Nara, Kyoto, and Dazaifu (Kyushu).

The buildings which comprise the Tokyo National Museum (TNM) are often cited as important examples of Western-style Meiji period architecture, while the museum's collections are easily among the greatest in Japan, both in size and in artistic or historical significance; numerous National Treasures are housed at the museum.

The museum's collections include extensive collections of Chinese and Japanese artworks and artifacts, as well as objects from Korea, South and Southeast Asia, the Middle East, and beyond. The museum's first director, Machida Hisanari, envisioned the creation of a universal museum of the world's cultures, after the model of the British Museum. He worked to encourage cultural heritage protection legislation, and supported both historical research and the gathering of historical materials for the collections, as well as the undertaking of large Industrial Expositions, which would bring in objects from around the country and around the world, which might then be acquired by the museum.

The initial History and Tradition Section of the museum soon became the History section, and under director Mori Ôgai, the museum's exhibits were rearranged to flow chronologically. This provided a clearer historical narratives for visitors to gain a better understanding of Japanese history. In the 1920s-1930s, however, there was a push from the government for the museum to put greater emphasis on pre-Meiji period artworks, in order to inspire in visitors appreciation of the greatness of Japanese history and culture. Thus, the administrative/curatorial departments, and the exhibitions, were reorganized to place greater emphasis on art. The History department was eventually disbanded, and today the permanent exhibitions continue to have a greater flavor of being a survey of national art history, than of history; even so, renewed interest in history continues to grow, and a few galleries continue to be dedicated to the display of historical documents and the discussion of historical topics.[1]

The first works of Chinese calligraphy and painting obtained by the museum were those from the personal collection of late Edo period scholar Ichikawa Beian (1779-1858), donated to the museum by Beian's son and grandson beginning in 1900. Donations by Hayashi Munetake, Aoyama San'u, and Takashima Kikujirô also served as important elements in the early stages of the formation of this collection.

The donation of the mummy of Pasherienptah in 1904 by the Director-General of Egypt's Department of Antiquities, Dr. Gaston Maspero, marked the beginning of the museum's Ancient Egyptian collections. Objects brought back by Ôtani Kôzui, who led expeditions to Central Asia in 1902-1914, similarly serve as the core of the museum's collection of artifacts from Western China and other parts of Central Asia. These collections, along with those of objects from mainland Asian cultures, are housed in the Tôyôkan ("Oriental Hall"). Artifacts from ancient Iran/Persia were among the museum's particular priorities when the Tôyôkan was first opened in 1968.[2]

The museum's collections of Ryukyuan materials has at its core a group of objects given to the museum in 1884 by the Ministry of Agriculture and Commerce. The Ministry had been collecting Ryukyuan ethnological objects for the German Anthropological Society, as objects to study; those objects not sent to Germany were given to the museum.

Prior to the construction of the Museum and its opening in 1881, the former site of the Yushima Seidô Confucian academy was used to house exhibitions beginning in 1872; though not explicitly referred to as a "museum" (let alone a "Tokyo" "National" "Museum"), the exhibitions held at the Yushima Seidô are sometimes described as marking the beginnings of the TNM.[3]

The Hyôkeikan, today the Archaeological Wing of TNM, is a two-story Neo-Baroque stone structure topped with a copper dome. It was completed in 1909, nominally as a gift from the people of Tokyo presented to the Imperial family, in honor of the wedding of the Crown Prince (who would later go on to rule as Emperor Taishô). In reality, this was not paid for by popular donation, or by tax revenues, but by a small coalition of political and corporate movers-and-shakers who wished to strengthen their ties with the Imperial institution. They included businessman Shibusawa Eiichi, Tokyo prefectural Governor Senge Takatomi, and Mayor Matsuda Hideo, who headed Tokyo's "Association for the Celebration of the Crown Prince's Wedding," and who began the project as early as March 1900, commissioning Katayama Tôkuma to design the new building. Contributions were collected from 7,310 members of the association, and from 15,890 other individuals, to help fund the construction. In the end, construction was completed in about eight years, at a cost of just over 540,000 yen.[4] The gift was intended to symbolize a growing public connection to the Crown Prince, and loyalty to him.[5]

The museum's main hall (Honkan) stands on the former site of the honbô (Abbot's Residence) of Kan'ei-ji; the gate to the honbô remained in place after the museum's construction and served as the main gate to the museum from 1878 until 1923. When the museum was rebuilt following the 1923 Great Kantô Earthquake, the gate was relocated, and now stands before the Ueno Rinnô-ji.[6] The current Honkan dates to 1938.