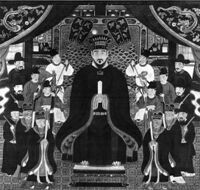 Shô Genko, also known by the Japanese-style name Kobashigawa Chôan, was a painter who served under five successive kings of Ryûkyû. The first painter to ever be elevated to the rank of ueekata,[1] he is best known for his posthumous royal portraits of the kings of the kingdom, but is said to have also been a master of, in particular, bird-and-flower painting, and paintings of tigers.

Genko was born in Shuri, and began teaching Chinese-style painting in Kagoshima in 1801.[1]

Many of his works were stored at his former home for many years, but most were destroyed in the 1945 battle of Okinawa.