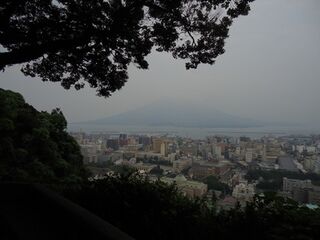 Sakurajima and the city of Kagoshima, as seen from the observatory point atop Shiroyama

Kagoshima was the chief castle town of Satsuma han, home to Kagoshima castle, and is today the capital of Kagoshima prefecture.

People are known to have lived in the region since the Jômon Period. The region would have been on the distant peripheries of the Yamato and Nara states, but began to be more fully incorporated into the state in the mid-Heian period. A fortress called Tôfukuji was established as early as 1053, by the Haseba samurai clan. This Tôfukuji fortress, along with the neighboring branch shrine of Kasuga Shrine established nearby, formed the core of what would later develop into the fuller castle-town of Kagoshima. The area was incorporated into the Shimazu-shô shôen estate sometime in the 11th or 12th century, and the Shimazu clan appointed jitô or other representatives to administer the territory beginning in the 1180s.

Tôfukuji castle fell to the Shimazu in 1341, and from then on, the Shimazu made Kagoshima their chief site of residence, and thus the center of power in the region. The clan relocated within the city several times, however, moving from Tôfukuji to Shimizu castle (a site on the mountain behind what is today Shimizu Middle School), then to Uchi castle (the site of which is today Dairyû Elementary School), and finally in the first years of the 1600s to Tsurumaru castle (also known as Kagoshima castle).[1]

The city centers on a neighborhood called Kanmachi (上町), the location of which makes it an important strategic point for connecting Satsuma and Ôsumi provinces, and for governing both. When the Shimazu were based at Shimizu castle, many of their retainers maintained mansions in this area, forming the core from which the castle-town expanded. The Kanmachi neighborhood then began to develop into its current form once the Shimazu relocated to Uchi castle.[1]

The region first appeared on European maps as "Cangoxina."[2] Once Tsurumaru (Kagoshima) castle was built, the city began to grow all the moreso. In the 1550s, the city's population was around 4,000;[3] by the mid-Edo period, it had grown to around 58,000.[4] Samurai comprised a significant proportion of the city's population, perhaps as much as 90% at times, and lived chiefly in three sections of the city: six neighborhoods of Kanmachi (上町), twelve in Shimomachi (下町), and four in Nishidamachi (西田町). Roughly 5,000 commoner townsmen also lived in the castle town, but as the domain government exercised strong control over the local economy, a very significant portion of merchants and the like operating in the city were either low-ranking samurai or goyô shônin (merchants in the service of the lord/domain).[5][6]

Kagoshima was also home to the Ryûkyû-kan, a branch office of the government of the Ryukyu Kingdom, and Ryukyuan officials are said to have wandered the city freely, at least at certain times; indeed, the people of the city are said to have been quite accustomed to Ryukyuan personal and cultural presence, and most Edo period depictions of the city or its port show Ryukyuan ships in the harbor. Contact with Ryûkyû meant some considerable influence from Ryukyuan culinary culture, for example, and the predominance of sweet potatoes and pork in local cuisine stems from this Ryukyuan influence. However, for the Shimazu clan at least, if not for the common people of the city, Ryukyuan influence also meant the introduction of elements of elite Chinese culture. In contrast to Nagasaki, where the Chinese influence was that of commoner merchants from southern China, Kagoshima enjoyed, indirectly via Ryûkyû, elite cultural influences from the Beijing Imperial Court itself. Chefs at the Ryûkyû-kan, for example, prepared food such as would be prepared in the Ryukyuan royal court, or the Chinese Imperial court.[7]

One of the chief central commercial districts of the city, today known as Tenmonkan, can be said to trace its history as such back to 1615, when Shimazu Iehisa designated forty-eight merchants, including fishmongers, salt sellers, and the like, to establish a market. Known originally as Nayashû (納屋衆), the market later came to be known as Nayanbaa (納屋馬場), and from the Meiji period up through 1935, when a new "Central Market" (chûô ichiba) was established, Nayanbaa remained the chief fish market for the city's residents. Today, Naya-dôri remains one of the major avenues in the broader Tenmonkan district, filled with shops, restaurants, and the like. The district takes its name from the Tenmonkan, an astronomical observatory and research center originally begun as the Meijikan by Shimazu Shigehide in 1779. At that time, the district was one of samurai residences, surrounded by high stone walls; reception halls known as the Hanaoka yashiki and Otsukiya were also located within the district.[8] During the Taishô period, Tenmonkan became the center of Taishô urban culture in Kagoshima, with cafés, jazz bars, and cinemas.[5]

The city was provided with fresh water via a series of pipes as early as 1723, when Shimazu Tsugutoyo oversaw the construction of waterworks connected the Hiyamizu spring at the northern end of Shiroyama (near the castle) with the castle-town below. The spring had been praised by Kanpaku Konoe Nobusuke (d. 1614), and its naturally cool waters were known as "Konoe water" (Konoe no mizu) from then on. This system of waterworks was expanded under Shimazu Narioki in 1839.[9]

One of the city's main ports was at the mouth of the Inari-gawa (Inari River), in or near Kanmachi. However, beginning in 1840, sand and soil was dredged from the bottom of the Inari in order to build up an artificial area of land which came to be known as Gionnosu; numerous coastal defense batteries were installed there in the 1850s-1860s.[1]

Some 15.6 hectares of land running east-west along the north side of the castle grounds, at the foot of Mt. Shiroyama, were established in 1890 as Shiroyama Park (Shiroyama kôen), the first public park in the city. Today, the Prefectural Library, Reimeikan History Museum, City Art Museum, Tanshôen gardens, and Terukuni Shrine run east-west to the south of the park. Near the western end of the park is a lookout point roughly 107 meters high.[11]