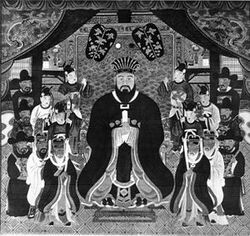 Shô Shin was a king of the Kingdom of Ryûkyû, the third of the line of the Second Shô Dynasty. Shô Shin's long reign has been described as "the Great Days of Chûzan", a period of great peace and relative prosperity. He was the son of Shô En, the founder of the dynasty, by Yosoidon, Shô En's second wife, often referred to as the queen mother. He succeeded his uncle, Shô Sen'i, who was forced to abdicate in his favor.

His reign was characterized by political and military expansion and the consolidation of power under the royal court at Shuri; the transformation of the role or position of the king from being a local or regional "sea lord" boasting recognition from China as a legitimate trading partner, into being a Confucian monarch with strong, centralized power over an extensive territory, managed through an established bureaucracy and system of rule and law; a height of maritime trade activity and prosperity; the renovation of Shuri castle and the construction of numerous monuments, temples, shrines, and other structures speaking to the power and glory of Shuri; and the establishment or standardization otherwise of numerous aspects of what would remain the foundation of the structure and character of the Ryûkyû Kingdom for centuries, until its dissolution in the 1870s.

Much of the foundational organization of the kingdom's early modern administration and economy is traced back to developments which occurred during Shô Shin's reign. Shô Shin developed a court bureaucracy more centralized and standardized than ever before, including perhaps the first system of standard practices of employing administrative documents and maintaining written records; in this and various other important ways, the kingdom under Shô Shin began to resemble that of a Confucian kingdom (and no longer the domain of rival wakô "sea lords") more than ever before.[1]

As government became more institutionalized and organized, the anji (local lords) gradually lost power and independence, becoming more closely tied to the central government at Shuri. In order to strengthen central control over the kingdom, and to prevent insurrection on the part of the anji, Shô Shin gathered weapons from all the anji to be put to use for the defense of the kingdom, and ordered anji to make their residences in Shuri; lords separated from their lands and from their people were far less able to act independently or to organize rebellion, and, over time, their emotional connections to Shuri grew, those with their territory weakening. The residences at Shuri of the anji were divided into three districts - one each for those coming from the northern, central, and southern areas of Okinawa Island which had formerly been the independent kingdoms of Hokuzan, Chûzan, and Nanzan respectively. These regions were now renamed Kunigami, Nakagami, and Shimajiri, respectively, place names which remain in use today. Through intermarriage, residence in Shuri, and other factors, the anji came to be more integrated as a class, more closely associated with life and customs and politics at Shuri, and less attached to their ancestral territorial identities.

The anji left deputies, called anji okite, to administer their lands on their behalf, and some years later a system of jito dai, agents sent by the central government to oversee the outlying territories, was established. Some anji of the northern regions were allowed to remain there, not moving to Shuri, as they were too powerful for the king to force their obedience in this matter; the king's third son Shô Shôi was made Warden of the North, however, and granted authority to maintain peace and order in the region[2].

The Shuri dialect of the Okinawan language used by administrators and bureaucrats became standardized at this time, and a golden age of poetry and literature blossomed. The first volumes of the Omoro Sôshi, a collection of poems, songs, and chants reflecting centuries-old oral tradition as well as contemporary events, were completed in 1532[3]. Along with later volumes, the Omoro Sôshi would become one of the chief primary sources for modern-day historians studying the kingdom's history.

The process of moving the anji to Shuri also brought about major changes to the city, including the construction of a great many grand gates, pavilions, lakes, bridges, monuments, and gardens. There came to be a great demand for masons, carpenters, and others, as well as for a wide variety of goods and materials, imported by each anji from his own territories. Okinawa Island quickly became more economically integrated, with goods and labor traveling to and from Shuri and the neighboring port city of Naha[4]. Economic integration allowed territories to become more specialized, and the production of luxury goods expanded significantly. Various kinds of hairpins and other ornaments became standard elements of the fashions of courtiers and bureaucrats, new techniques in producing and weaving silk were imported, and the use of gold, silver, lacquer, and silk became more common among townspeople[5]. Urbanization led to increased prosperity for merchants, traders, courtiers, townsmen and others, though historian George H. Kerr points out that farmers and fishermen, who made up the vast majority of the Okinawan population, remained quite poor[6].

Shô Shin also had many monuments, temples, and other structures erected, and constructed a new palace building in Chinese style. These served vital purposes as part of efforts to construct and project discourses of legitimacy, both through adopting Chinese modes and styles of "kingship," and through constructing and asserting an inheritance from a long line of kings. Most of the oldest surviving records or objects relating to articulating a long line of previous kings date to the time of Shô Shin; one example of this was the arrangement and display at the castle of ancestral tablets for each of the previous kings, all in one place, where they had been previously scattered across different temples and other sites.[7]

Court rituals and ceremonies were also dramatically altered and expanded, in emulation of Chinese modes. A pair of tall stone "Dragon Pillars" were placed at the entrance to the palace, patterned not after Chinese, Korean or Japanese models, but after those of Thailand and Cambodia, reflecting, as Kerr points out, the reach and extent of Okinawan trade and the cosmopolitan nature of the capital at this time[8]. The Buddhist temple Enkaku-ji was built in 1492, Sôgen-ji was expanded in 1496, and in 1501, Tamaudun, the royal mausoleum complex, was completed. Shô Shin successfully petitioned the Korean royal court, several times, to send volumes of Buddhist texts[9]; the first metal movable type printing presses in the world had been invented in Korea in the 13th century. In the thirtieth year of his reign, a stele was erected in the grounds of Shuri Castle, listing Eleven Distinctions of the Age enumerated by court officials. A reproduction of this stele, destroyed in the 1945 Battle of Okinawa along with the castle, stands in the castle grounds today.

The reign of Shō Shin also saw the expansion of the kingdom's control over several of the outlying Ryukyu Islands. Okinawan ships began in the late 15th century to frequent Miyakojima and the Yaeyama Islands; following a series of disputes among the local lords in the Yaeyama Islands which broke out in 1486, Shô Shin in 1500 sent military forces to quell the disputes and establish control over the islands. Kumejima was brought under firm control of Shuri, and liaison offices were established in Miyako and Yaeyama, in 1500 and 1524 respectively[10]. Administrative officials were similarly installed on Amami Ôshima and Yoronjima in the 1500s-1520s.[11]

Shô Shin also effected significant changes to the organization of the native noro (high priestesses) cult and its relationship to the government. He owed his uncle's abdication, and his own succession to his sister, the noro of the royal family, a special position known as the kikoe-ôgimi. He established a new residence for the kikoe-ôgimi just outside the gates to the castle, and erected high walls in 1519 around the Sonohyan Utaki, the sacred space and accompanying sacred hearth which she tended. A system by which the king and kikoe-ôgimi appointed local noro across the kingdom was established, tying this element of the native Ryukyuan religion into formal systems of authority under the government[12].

Shô Shin had two notable consorts over the course of his reign. He first married his cousin Kyojin 居仁, a daughter of his uncle Shô Sen'i, but some kind of internal family or court politics led to their first son, Shô Ikô, being driven from the court. Shô Shin then had multiple children with a consort named Kagô 華后, including his fifth son, who would be named crown prince in 1508 or 1509 and then later succeed him as King Shô Sei.[13]

After a fifty year reign, Shō Shin died in 1526, and was succeeded by his son Shô Sei. It is said that after such a long reign, officials encountered difficulties in determining the proper way to conduct the royal funeral, succession rituals, and other important related ceremonies[14]. Historian George Kerr writes that "Okinawa was never again to know the halcyon days of Sho Shin's reign[15]."