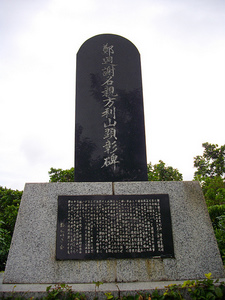 A stele erected in honor of Tei Dô, in Tsushima Maru Memorial Park in Naha, Okinawa.

Tei Dô was a Ryukyuan scholar-bureaucrat who was among the chief advisors to King Shô Nei at the time of the invasion of the Ryûkyû Kingdom by samurai forces from Satsuma han. He was known both by the Chinese-style name Tei Dô[1], and by his Ryukyuan rank or title, ueekata of Jana[2]. The son of interpreter Tei Roku, he was the 9th head of the Tei family, which traced its lineage from Tei Gisai, one of the original 36 immigrants from Fujian.[3] He is known for his strongly pro-Ming and anti-Shimazu stances, which contributed to exacerbating Shimazu frustrations and desire to invade the kingdom.[4]

Born into the Kumemura scholar-aristocrat community, he left for China in 1565 (at age 16), where he stayed for six years, studying at the Imperial Academy (Guozijian) in Nanjing. After his return, he led or otherwise joined tribute missions to China from time to time.[5] A letter from Jana informed the Ming court in 1591 of Toyotomi Hideyoshi's plans to invade Korea.[6]

He was appointed to the Sanshikan in 1606, becoming the first member of the Kumemura lineages to be permitted to become one of the three topmost royal advisors.[7] That same year, in 1606/5, he traveled to China alongside Mô Ôgi as part of a mission expressing gratitude for investiture.[3]

During the invasion, alongside Tomigusuku Seizoku, he commanded a force of 3000 men in the defense of the harbor of Naha, successfully repulsing the Satsuma approach by ship.[8] The samurai, however, simply made landfall elsewhere, and marched overland to seize Shuri castle, the royal palace. When they heard of the attack on Shuri, Tei Dô and Tomigusuku began moving their troops from Naha in order to ward off the attack, but in the end they were too late.[9] According to some sources, Jana was leading a force in the defense of Kumemura, and had lost perhaps roughly 300 men in that skirmish, when he was captured by Shimazu forces; the men who captured him may have been Sata Hisanobu and Komatsu Sukejirô.[10]

After the kingdom's defeat, the king and his advisors were taken to Kagoshima, where they were forced to sign a number of oaths, swearing their loyalty and fealty to Satsuma. Among these were agreement to Satsuma's version of history, in which Ryûkyû had been beholden to Satsuma since the very beginning of the 13th century, and was deficient in its fulfillment of its obligations to Satsuma, thus bringing this invasion, colored by Satsuma as a punitive mission, upon itself; the advisors were also required to swear their loyalty to Satsuma over loyalty to their own king, agreeing to turn against the king under certain circumstances. Only Tei Dô refused to sign. As a result, Satsuma samurai beheaded him on the spot.

Many Ryukyuan chronicles and other primary sources evidence a strong bias against Jana ueekata, alleging that it was on his advice that the king pursued the path which led to the Japanese invasion and the conquest of the kingdom. It is said that Jana ueekata was particularly rude in his response to requests from Toyotomi Hideyoshi that Ryûkyû contribute to Hideyoshi's efforts to invade Korea in the 1590s, and that in various other ways it was Jana ueekata's fault that tensions between Ryûkyû and Japan rose, eventually leading to the Japanese decision to invade. As Jana ueekata is also known for having been particularly pro-China in his leanings, it is possible that he was politically unpopular among certain factions of officials, or that he was more generally outside of the political mainstream, thus inviting the disfavor of those who wrote the histories of the kingdom. Further, some sources indicate that his behavior in Kagoshima was particularly dishonorable or otherwise inappropriate, in the manner in which he refused to sign the oaths demanded of the king and his advisors.

Though villainized in this manner for centuries, Tei Dô's reputation has in recent years been rehabilitated somewhat, and a monument in his honor erected near Naminoue Shrine, near the port he helped defend.