From SamuraiWiki
(Redirected from Lacquerware)
Jump to navigationJump to search 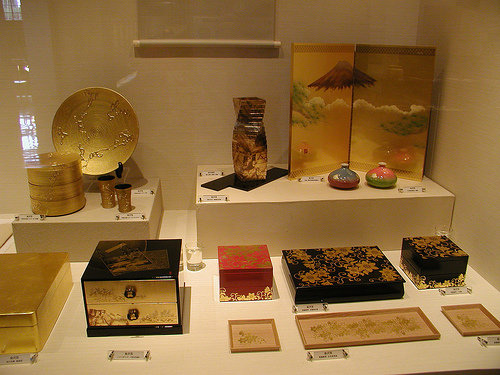 A variety of lacquerware and gold-foil-decorated objects, on display at the Ishikawa Prefectural Museum for Traditional Products and Crafts

Lacquer is a natural plastic-like substance made from the sap of the lac tree; typically combined with red or black coloring, it is used for both decorative and practical purposes, covering objects in an attractive and waterproof coating.

Scholars formerly believed that lacquer techniques were first introduced to Japan from China; however, examples of lacquer use in the Japanese archipelago have been discovered dating back roughly 6000 years, indicating that lacquer was being used in the islands as early as in the Jômon period.[1] It has been used in China since at least 600 BCE. The sap comes from the tree in a white or light grey translucent form, but throughout East Asia it is most often mixed with carbon to produce black lacquer, or with cinnabar to produce red lacquer. Upon exposure to oxygen and humidity, it "cures," polymerizing and hardening into a natural plastic which is waterproof and resistant to heat and certain acids.[2]

Lacquerwares (J: shikki) are typically made with wooden or paper cores, which are then coated in many layers of lacquer, resulting in surprisingly lightweight objects. Other materials can be used as the core, however. The most typical forms for lacquerware are boxes, trays, and dishes, but lacquer has also been used as a sculptural material (chiefly in the Nara period; see dry lacquer sculpture), and as a material for painting with (also chiefly in the Nara period, though most famously used in this manner by Shibata Zeshin 1807-1891).

The sap of the lac plant - i.e. lacquer itself - is poisonous to the touch, in a similar manner to the touch of poison ivy or poison oak, until the material cures and hardens. However, as is the case with poison ivy and its ilk, a percentage of people have a natural immunity to the effects, allowing them a particular advantage in becoming successful lacquerware artisans. The fruit of the tree can be used to make wax, and was a prominent regional specialty export of some domains in the Edo period.[3]

Today, there are perhaps only around twenty sap-gatherers (kakiko) active in Japan. Roughly ninety percent of the lacquer used to make lacquerwares in Japan today is imported from China.[4]

Lacquer sap taken from the tree is initially a white, milky color, and grows brown and then black as it is exposed to the air. Sometimes vermillion pigment is mixed with the lacquer to produce a red color. The lacquer is then placed under sunlight or artificial UV light to turn the blackening lacquer transparent, allowing the red color to show through; though the production of red lacquerwares is not unique to Ryûkyû, the strong sub-tropical sunshine there is often cited as a key factor making the Ryûkyûs particularly ideal for lacquerware production.[5]

Lacquerwares are decorated in a variety of ways, including:

Several making use of gold foil or gold leaf:

Several making use of other materials inland or applied: