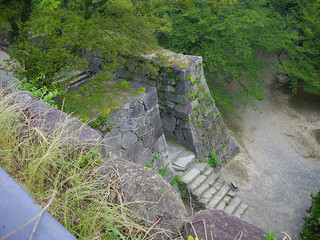 A portion of the ruins of Fukuoka castle

Fukuoka han was an Edo period domain ruled by the Kuroda clan from Fukuoka castle. With a kokudaka of 520,000 koku, it was among the wealthiest domains in the realm. Controlling essentially the entirety of Chikuzen province,[1] the Kuroda were among only about ten or so daimyô clans to claim honkunimochi status, a level of prestige restricted to those who controlled an entire province.

The Kuroda first built Fukuoka castle after Kuroda Nagamasa was granted the domain by Tokugawa Ieyasu following the battle of Sekigahara. This marked the beginning of the castle-town of Fukuoka, which then grew up around the castle, eventually merging with nearby Hakata to become one of the largest cities and most major ports on Kyushu. Many samurai already resident in Chikuzen refused to swear fealty to the Kuroda, who were not traditionally/historically lords of that area, and so instead of becoming formal retainers based in the castle town, these samurai relocated to the countryside, maintaining some degree of elite status, and becoming one variety of gôshi.

Branches of the Kuroda clan controlled nearby Akizuki han and, for a brief time from 1688 to 1721, Tôrenji han.

Beginning in 1641, Fukuoka was assigned, along with Saga han, to contribute to the defenses of Nagasaki harbor. As a result of this obligation of military service, the sankin kôtai obligations of these two domains were lessened.

Over the course of the 17th century, as much as 100,000 koku worth of new agricultural land was reclaimed or otherwise brought into cultivation. Farmers who undertook such efforts were incentivized and rewarded with significant tax breaks.[2]

In 1718, the population of the domain reached its Edo period peak, at around 372,000 people. The Kyôho famine of 1732 struck a harsh blow to the domain's inhabitants, killing as many as 70,000 people, or around 22% of the population. Among some communities, the proportion lost was as high as 45 percent. The population stabilized, and stagnated, afterwards, around 307,000, and only first began to recover around 1800, not reaching pre-famine levels again until the Bakumatsu period. In the meantime, unlike in many other parts of the archipelago, little new land was brought under cultivation.[3]

In the early years of the period, many villages were held in fief by Kuroda retainers; some villages were even split between multiple retainers. However, before long, this system of subinfeudation was abandoned in favor of a centrally-directed network of appointed administrators.[4]

Areas of the domain were administered by magistrates (bugyô) appointed by the Kuroda: machi bugyô (town magistrates) oversaw the twin cities of Hakata and Fukuoka, kôri bugyô (district magistrates) oversaw farming villages and post-towns, and ura bugyô (harbor magistrates) oversaw coastal villages. Thirty areas had been designated as ura ("harbors") by 1605, each coming under the jurisdiction of an ura bugyô; by the 18th century, this number had swelled slightly to 39, with each designated area encompassing anywhere from a few hundred to more than a thousand villagers. A number of villages were divided in half, or even in three, with "harbor portions" (urabun), "hill portions" (i.e. farming areas, okabun), and "town portions" (i.e. commercial areas, machibun) coming under the jurisdictions of different magistrates. Some towns were even physically, geographically, relocated in order to effect this distinction; these included the villages of Shingû and Fukuma, for example, which had previously been part of the Minato and Shimosaigô villages respectively.[5]

While all these various bugyô were samurai retainers, villagers also played a role in administration. Groups of ten to thirty adjacent farming villages, or a similar number of not so directly adjacent coastal villages, were grouped together into districts known as fure, each of which was overseen by a headman known as the ôjôya. This was the highest administrative position open to villagers (peasants). The duties of the ôjôya generally included supervising the work of the headmen of individual villages, and serving as an intermediary between those individual village headmen and the samurai authorities (chiefly, the bugyô). The ôjôya also oversaw tax payments, rice shipments; investigated fires, shipwrecks, and other such incidents; organized corvée labor; issued fishing licenses; and mediated in local conflicts. Up until 1762, there were five such ôjôya, overseeing between them all the villages in the domain. In that year, the number was reduced to two (one from Shingû and one from Fukuma), and then increased back up to three in 1770, after which there were two ôjôya overseeing the kami-ura ("upper" harbors) north of the castle, and one overseeing the shimo-ura ("lower" harbors), those west of Fukuoka. Each of these district headmen was simultaneously village headman in his own village, and sometimes passed on the position to his heirs; generally, however, the position was not considered heritable, and a new ôjôya was appointed by the domain government upon the retirement, death, or discharge of the previous one.[6]