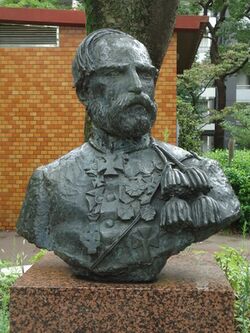 Bust of Siebold in Akatsuki Park in Tokyo

Philipp Franz von Siebold was the chief medical officer for the Dutch East India Company (VOC) on Dejima from 1823-1829, during which time he introduced much knowledge about the West into Japan, and vice versa.

Siebold attended medical school in Würzburg, in Bavaria, and studied zoology, botany, and anthropology at that time.

During his time on Dejima, Siebold interacted closely with numerous Japanese translators and students, and engaged in much cultural and informational (scientific & medical) exchange. He brought more than 500 Japanese books back to Europe, and through various publications introduced Europeans to a variety of aspects of Japanese culture and knowledge, in many cases for the first time.

Not only a physician, but also a botanist, Siebold took a particular interest in bonsai, and along with Isaac Titsingh contributed to early European knowledge of the subject. He built a greenhouse on Dejima, where he raised hydrangeas, hostas, and other Japanese plants, adapting them to European soil and conditions; Siebold also smuggled tea plants out of Japan, introducing them to the Dutch East Indies. In exchange for copies of the journals of Ivan Fedorovich Kruzenshtern, revealing the extent to which the Russians had surveyed the coasts of Honshû, Ezo, the Kuril Islands, and Sakhalin, Takahashi Kageyasu gave Siebold copies of a series of maps produced by Inô Tadataka, along with some other documents.[1]

Suspecting Siebold of political or even military motives in possessing those maps, however, which were seen as tantamount to state secrets, the shogunal authorities raided Siebold's home several times in 1828, imprisoned many of his Japanese friends and students, and confiscated numerous objects they suspected he was planning on smuggling out of the country. Siebold managed, however, to hide many of his notebooks, maps, and other documents and items in a lead-lined chest, which escaped the authorities. Siebold was, for a time, forbidden from leaving the country, and then, on 1829/9/25, he was sentenced to be banished from Japan. He departed the following week, on 1829/10/3, on board the Cornelius Houtman, leaving behind a two-year old daughter, Oine, who would later go on to become the first female physician in Japan. Little is known about Oine's mother, Kusumoto Otaki, who may have been a courtesan of the Maruyama district, or who may have simply posed as one in order to gain access to Dejima.

Siebold continued to communicate with Dejima, and with his daughter, during his lengthy absence from Japan. He attempted to join Commodore Matthew Perry on his journey to Japan in 1853-1854, but was denied permission to do so, for fear that having been formally banned from the country, his presence might endanger the mission.[2] Siebold was successful in returning to Japan, however, on 1859/7/6, being invited along with his son Alexander to serve as a diplomatic advisor,[3] and left again for the final time in 1862/3. Alexander remained at the British Legation in Edo at least through 1868, where he worked as an interpreter.

After returning to the Netherlands, Siebold displayed portions of his collection of Japanese objects at his home at Rapenburg 19 in the city of Leiden, and invited members of the public to come in and see them. That house, today known as "SieboldHuis," has been transformed into a cultural center, described as "the first official Japan centre in the Netherlands."[4]

Nippon was published in Leiden in multiple volumes between 1832 and 1858. It was among the first books introducing knowledge about Japan into Europe, including being one of the first to discuss Japanese Buddhism, and Japanese medicine.

Manners and Customs of the Japanese in the Nineteenth Century was published in 1841.

Siebold amassed a considerable collection of Japanese books, prints, paintings, and artifacts during his two lengthy stays in Japan. Much of the objects from his earlier stay are today in the National Museum of Ethnology in Leiden, in the Netherlands. However, some 1,088 titles (comprising 3,441 volumes), representing the entirety of what he obtained on his latter stay in Japan (plus some 43 titles in 199 volumes collected during the earlier sojourn), were acquired by the British Library from Siebold's son Alexander; on 22 July 1868, the Library paid £1100 for this collection, and most of the objects thus acquired have been identified as coming from Siebold's collection only by the "22 JY 68" stamp placed upon them. While the Siebold collection of prints and books has been described as "not rich in early or rare editions," it became at that time the largest collection of Japanese works in Europe. And, as late as 1998, the 125 or so one-of-a-kind manuscripts from Siebold's collection continued to represent roughly half of all such Japanese manuscripts owned by the Library.[5]

Though Siebold's collection originally entered the British Library along with two catalogs listing their contents in English and in Japanese, these catalogs appear to have been lost. A later copy of the Japanese-language version of the catalog surfaced, however, in the Swedish Royal Library in Stockholm in the early 1970s.[6]