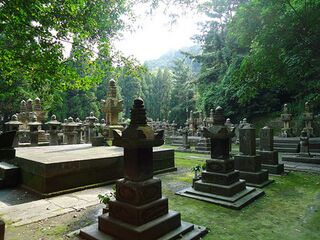 Fukushô-ji was a Sôtô Zen temple in Kagoshima, which served as the family temple (bodaiji) for the Shimazu clan. At its height, it was the largest temple in Satsuma domain, with some 1500 monks in residence.

The temple was established in 1394 when Shimazu Motohisa invited the Zen priest Sekioku Shinryô to Kagoshima to establish a bodaiji for the Shimazu clan. It later became one of the three largest head temples for monk registrars (僧録, sôroku) in the country, overseeing all the Buddhist monks in southern Kyushu, as well as a chokuganjo, a prayer hall that could be used by the Emperor. Fukushô-ji branch temples were established in numerous locations across Kyushu, Shikoku, and the Chûgoku region. In the 15th century, Fukushô-ji was the site of a notable meeting between Francis Xavier and the Buddhist monk Ninshitsu, in which they discussed the possibility of Christian missionary activity in Kagoshima.

Fukushô-ji remained the chief Shimazu family temple throughout the Edo period, with each successive head of the family being buried there. Ryukyuan scholar-officials on missions to Japan regularly paid formal visits to the temple, as well as to the Shimazu temples of Nansen-in and Jôkômyô-ji.[3]

Fukushô-ji was abolished in 1869, as part of the haibutsu kishaku anti-Buddhist campaigns of the early Meiji period. The following year, some 375 Christians fleeing persecution by the Meiji government in Nagasaki came to Kagoshima seeking refuge, and took up residence on the former site of the temple. They are said to have been treated well there, and most returned to Nagasaki by 1873; however, 53 Christians who died while in Kagoshima were buried at a Christian cemetery on a hill just above the samurai cemetery, created for that purpose in 1905 by Father Emile Raguet.

Though the temple is no longer in operation, the Shimazu clan cemetery which houses the graves of numerous generations of clan heads continues to be maintained on the site. Gyokuryû Middle School & High School now stands on the former site of the Fukushô-ji temple buildings.