From SamuraiWiki
(Redirected from Jokamachi)
Jump to navigationJump to search 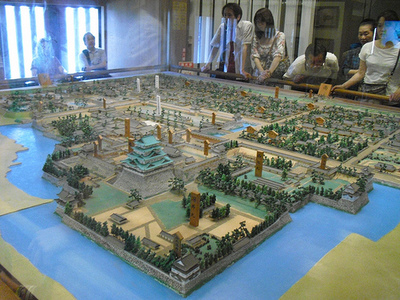 A model of Nagoya castle and the surrounding jôkamachi.

Jôkamachi (lit. "towns below castles") were cities which grew up around castles, especially those which served as a daimyô's "seat," the political center of a han (domain) in the Edo period.

Prior to the 1570s, castles were primarily defensive structures, rather than being the permanent political centers and daimyô residences they would later become. In 1570, the Imperial capital of Kyoto and the bustling ports of Nagasaki and Sakai were among the only cities of any appreciable size in Japan. This changed dramatically, and rapidly, over the course of the Azuchi-Momoyama period (c. 1573-1598) and the early decades of the 17th century. Daimyô seats became more permanent, and as daimyô encouraged merchants into their domains (and, especially, into their castle towns) in order to claim for themselves the economic and cultural benefits of such merchant activity within their borders, many castle towns grew into cities of considerable size, population, and economic power.

Castle towns in the 17th century numbered over two hundred,[1] and by 1700 Japan was home to some of the largest cities in the world. Roughly ten percent of the total population of the archipelago was already living in cities as early as the 1640s. By 1700, Edo is believed to have had a population of roughly one million; Osaka and Kyoto were home to roughly 300,000, and the daimyô seats of Nagoya and Kanazawa boasted around 100,000 people each.

Despite a considerable degree of daimyô autonomy within their respective domains, and cultural differences from one end of the archipelago to another, the vast majority of castle towns resembled one another quite closely in a number of respects: most had districts of samurai residences closely clustered around the castle, and townsperson (commoner) neighborhoods officially divided up by occupation; most also matched one another quite closely in the width of their roads, residential architectural styles, and certain other aspects of urban layout overall. Castles themselves were often surrounded by moats and walls, but the city as a whole not, unlike in China and many parts of Europe where a city wall defined the bounds of the urban space. In Japan, by contrast, cities or towns bled into farmland, with no city walls.[2]