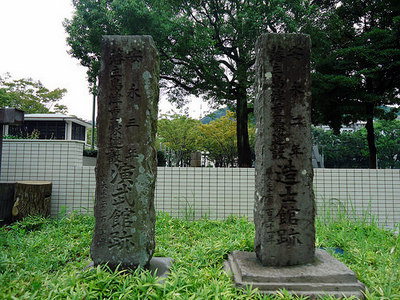 Stele in Kagoshima's Central Park, marking the former site of the Zôshikan and Enbukan

The Zôshikan was a domain school established in Kagoshima by Shimazu Shigehide in 1773. Its first head instructor was Yamamoto Masayoshi.[1]

The school covered some 3,350 tsubo on the site of the domain's chief Confucian Hall (seidô or senseiden), and included lecture halls and lodgings for samurai students who came from outside of the city. It was established simultaneously with a school of martial arts known as the Enbukan. Tachibana Nankei, a scholar from Kyoto who visited Kagoshima in 1782-1783, wrote that it was large and beautiful, the best in the realm (i.e. in all of Japan). The school was officially named "Zôshikan" in 1786.

As a result of succession disputes within the Shimazu clan in 1808-1809 (eventually ending in Shimazu Narinobu abdicating in favor of Shimazu Narioki), the curriculum of the school departed from its earlier purposes of training men for service. Shimazu Nariakira later lamented this change, and took steps to revive the quality of education at the school.

In 1869, the school was renamed Hongakkô (lit. "Main School"), and came to simply accept all students who completed elementary school. Studies were divided chiefly into Chinese Studies (kangaku), National Learning (kokugaku), and Western Learning (yôgaku). The school was completely destroyed in the Satsuma Rebellion of 1877.