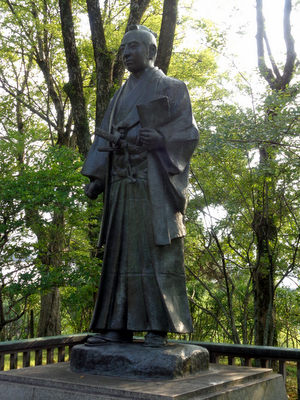 Abe Masahiro was the 7th Abe clan lord of Fukuyama domain, and Tairô, known for his role in ending the Tokugawa shogunate's policy of maritime restrictions and "opening" Japan to the West in the 1850s.

He was then appointed to the rôjû in 1843, at the age of 25.[2] He served as Tairô from 1845 until 1855. Initially, as Western encroachment expanded, and visits from Western ships became more frequent, Abe oversaw the strengthening of coastal defenses while simultaneously encouraging a somewhat conciliatory stance. After the so-called "Black Ships" of Commodore Perry arrived in 1853, he took the very controversial step of asking for the opinions or suggestions of the Imperial Court, and of the various daimyô, essentially abdicating the decision-making power (and, the appearance of competency and strength) of the shogunate.

After his death in 1857, Masahiro was succeeded by his younger brother Abe Masanori.[4]