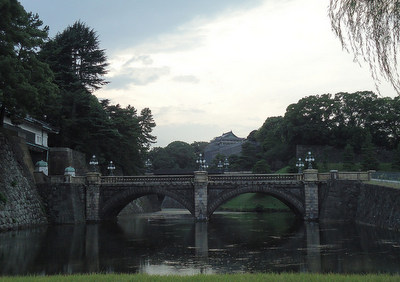 The famous Nijûbashi bridge leading into the palace.

The Tokyo Imperial Palace, or kôkyo (lit. "Imperial residence"), completed in 1888, is the seat of the Emperor of Japan. Located on the former grounds of the Tokugawa shoguns' Edo castle at the center of Tokyo, the palace compound includes imperial residences, meeting rooms, administrative offices, and ritual spaces, as well as several extensive private gardens and public parks, archives, and the Museum of the Imperial Collections, or Sannomaru Shôzôkan. While the former sites of the honmaru, ni-no-maru, and sannomaru of Edo castle are today mostly empty, the palace buildings being located chiefly in the former nishi-no-maru area of the compound,[1] a number of other buildings from the time of the shoguns either survive or have been rebuilt, along with many of the compound's gates, and much of the foundational stone castle walls.

Much of the buildings in the honmaru, ni-no-maru, and nishi-no-maru areas of Edo castle were destroyed in a series of fires in 1863. The shogunate hastily threw up some replacement buildings in the nishi-no-maru, which later became the temporary residence of the Meiji Emperor in 1869 to 1873; however, nothing was ever rebuilt of the Honmaru Palace.[2] A fire destroyed the palace on May 5, 1873, beginning in the Momijiyama section of the compound, and rampaging through the nishi-no-maru and other areas in a matter of hours. The Emperor, Empress, and Imperial Household Ministry relocated to the mansion of the Kishû Tokugawa clan, just outside the moats, that same day, designating the mansion the Akasaka Temporary Palace.[3]

Reconstruction of the palace was delayed numerous times, both due to financial concerns given the newness of the Meiji state and government, and due to debates over the style and material the new palace should be built in.[4] Construction was finally begun in 1884, and completed in 1888, with the Imperial family taking up residence early the following year. According to numerous sources of the time, Tokyo was only an anzaisho, a temporary base for a Court in motion, until that time, with the 1888 structure being the first in Tokyo to be called kyûjô (宮城, "Imperial Palace") rather than merely terms such as kôkyo ("imperial residence"), and with Tokyo's status as the sole Imperial capital (teito) ongoing until that time.[5] Further, Imperial communications, among other documents from the time, suggest that until the 1880s, the Imperial Palace was seen as less a national symbol, and more a mere residence. Historian Takashi Fujitani goes so far as to suggest that up until 1883 or so, there may not have been even a single urban planning proposal which featured an Imperial Palace at the center of the new capital.[6]

By 1883, however, there had begun to be a significant shift in attitudes or perspective among the Meiji elites, who now began to look towards developing Tokyo into a modern, national(ist) capital, impressive and symbolically powerful like those of the European nations. A petition to Imperial Prince Arisugawa Taruhito written that year by Kawaji Kandô is representative of the new view on this subject, expressing the need for an "eternal and immutable palace in Tokyo," which would reflect the majesty of the emperor and of the nation to all those who saw it, including foreign dignitaries and Japanese officials and nobility. In the petition, Kawaji also emphasizes that while the "temporary court" model was appropriate in ancient times when material culture (bunbutsu) was undeveloped, in this new modern period, Japan not only could, but should employ its modern architectural resources and technologies to build something demonstrative of those abilities.[7]

As construction neared completion, the Imperial Household commissioned numerous artists, textile producers, and the like, including Iida Shinshichi III of Takashimaya and Kawashima Jinbei II, in 1887, to produce works for decorating the palace.[8]

The Palace was completed in October 1888, roughly four months before the promulgation of the Meiji Constitution. It consisted of thirty-six buildings, all linked by corridors, and constructed mostly in a traditional Japanese style, in wood, with irimoya roofs. The palace was divided into roughly two sections: the oku kyûden, containing the private residences of the Emperor and Imperial family, with wholly traditional Japanese interiors; and the omote kyûden, including audience halls and meeting rooms, done in a combination of more traditional and more Western styles. Much of the furniture was hand-selected in Germany by architect Katayama Tôkuma, who would later go on to design several of the National Museums, and the Akasaka Detached Palace.[9]

A series of broad thoroughfares which cut through the palace's outer gardens (gaien) were constructed explicitly as "triumphal avenues" (gaisen dôro) for the Imperial Military Review of April 1906, with the explicit intention of creating a space for monumental national ceremonies in the modern (Western) mode.[10] Preparations for the Military Review also included tearing down the castle's Babasaki Gate, and filling in sections of the moat, making the Palace Plaza more publicly accessible.[11]

The inner palace buildings, closed to the public, include the imperial residences, official State Meeting Halls, administrative offices, and a set of three shrines where a variety of Imperial rituals are performed.

The three shrines, known as the kyûchû sanden, and referred to collectively as the Palace Sanctuary by historian Takashi Fujitani, include the kashikodokoro, shinden, and kôreiden. Only the first of these, in which a replica of the Sacred Mirror Yata no kagami is held and the Sun Goddess worshipped, existed in the Kyoto Imperial Palace. The shinden, dedicated to the myriad deities of heaven and earth, and the kôreiden, enshrining over 2,200 Imperial ancestors, were newly created in 1869 and 1871 respectively, albeit very much in forms emulating the appearance of ancient traditions. All three shrines were re-established and invested with their requisite spirits in the newly completed Imperial Palace on 1889/1/9, two days before the emperor and empress took up residence in the palace.[12]

A dôjô known as Seineikan (清寧館) located just within the off-limits areas, across the path from the Sannomaru Shôzôkan.

The former honmaru, ni-no-maru, and san-no-maru areas of the castle today constitute the Imperial Palace East Gardens (higashi gyoen) and are generally open to the public, along with the Kitanomaru Park. The latter contains within it the Tokyo National Museum of Modern Art's Crafts Hall (Tôkyô kokuritsu kindai bijitsukan kôgeikan), and the Nippon Budokan, a major public sports arena and concert venue.

The famous Nijûbashi, a short bridge built in the German Renaissance style, and one of the more iconic sights on the publicly-accessible portions of the grounds, leads directly to the Main Gate (Seimon) into the non-public areas of the palace. The bridge, and the gate, are themselves off-limits as well, but are easily visible from the main public plaza known as Imperial Palace Outer Garden (kôkyo gaien) or simply Plaza in front of the Imperial Palace (kôkyo mae hiroba). This plaza had previously been the nishi-no-maru shita (Lower Western Bailey) of Edo castle, and had been the location of a number of residences of high-ranking shogunate officials. In the first decade or so of the Meiji period, it became home to the Senate (Genrôin), the Peers' Club, the Home Ministry Library, and the private residence of Iwakura Tomomi. By 1888, however, this was all cleared away to make a broad open plaza, where people could gather to see the palace (and to be seen by the Emperor), and where various Imperial/national(ist) ceremonies and events could take place.[13]

This plaza was further expanded and opened up in 1906, through the filling-in of some sections of the moat, and through the dismantling of the Babasakimon, which had created a fatal bottleneck as crowds tried to push in and out of the plaza during victory celebrations in 1895. A pair of triumphal thoroughfares (gaisen dôro) were cut through the plaza, and an entrance created at the Hibiya end of the plaza, in preparation for the Triumphal Military Review of April 1906. One of the thoroughfares runs directly from Nijûbashi to the Babasaki Gate, while the other runs perpendicular, crossing in the center of the plaza and leading out of the Hibiya Gate.[14] While a sizable pedestrian plaza survives today, the Imperial Palace Outer Gardens extends across a much larger area; the two thoroughfares have since been paved over and transformed into major multi-lane automobile roads, making the Outer Gardens as a whole considerably more difficult to explore on foot. A famous statue of 14th century Imperial loyalist Kusunoki Masashige, sculpted by Takamura Kôun, stands in the far corner of these Outer Gardens (gaien).

The East Gardens feature a number of Edo period buildings (or their reconstructions), including the Fujimi yagura (the only three-story corner watchtower in the compound), Fujimi-tamon (a nagaya-style defensive structure), an ishimuro stone storehouse, the foundation platform of the tenshu (keep tower) which burned down in 1657 and was never replaced, the Suwa no chaya teahouse, and several guardhouses (bansho), as well as the Ninomaru Gardens designed by Kobori Enshû, the Sannomaru Shôzôkan, and the Tôkagakudô (Tôka Music Hall), constructed in 1966 for the Empress Kôjun's 60th birthday. One area of the gardens contains trees representative of each of Japan's 47 prefectures.