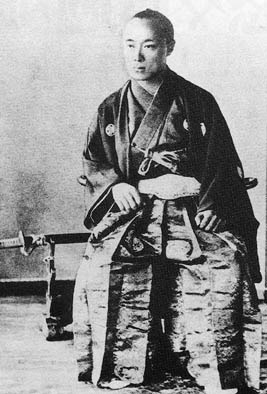 Yoshinobu was the seventh son of Tokugawa Nariaki, head of the Mito Tokugawa clan. He was adopted as heir of the Hitotsubashi Tokugawa clan, and became head of that family in 1847.[2] Later that same year, he enjoyed his genpuku (coming of age), being granted the use of a character from the name of Shogun Tokugawa Ieyoshi, and changing his name from Akimune or Shichirômaro to Yoshinobu.[3]

When it became clear that the shogun Tokugawa Iesada was not going to produce an heir, Yoshinobu was proposed as heir by a group who believed that in the turbulant age (now known as the bakumatsu), a mature man was needed as shogun. The group included Shimazu Nariakira of Satsuma, who married his adopted daughter Atsu-hime to the shogun in an attempt to influence him. Yoshinobu's supporters even tried to get backing from the imperial court, involving it for the first time in a Tokugawa family matter (Reishauer p. 208). However, the young Tokugawa Iemochi of the Kii Tokugawa clan was named as heir just before Iesada died in 1858; Yoshinobu's visits to Edo castle were then suspended.[5] The next year, during the Ansei Purge, Yoshinobu was ordered into domiciliary confinement. But in 1862 he was made the guardian of the young Iemochi, and following the latter's death in 1866 became shogun in January 1867.

Yoshinobu embarked on reform of the administration with the advice of the French envoy Léon Roches. There were also several attempts to form a council of leading daimyo which would be involved in government. Since until then only the hereditary Tokugawa vassal daimyo (fudai daimyo) had been involved in the administration, this was a major change. However, these plans fell through. Then Tosa han proposed that the shogun return his political authority to the emperor and head a council of daimyo under the emperor. The shogun would also continue to control the Tokugawa estate. Yoshinobu announced this "Return of Power" (Taisei Hôkan 大政奉還) in Kyoto on 1867/10/14 and was again entrusted with the government of the nation. But nothing really happened.

Two months later, forces of Satsuma, Chôshû, and several other han announced a Restoration of the Monarchy (Ôsei Fukko 王政復古) and the Boshin War started. Yoshinobu was defeated in the Battle of Toba-Fushimi and returned to Edo aboard a naval ship. His re-entry into the city does not appear as a popular spectacle in popular media of the time, though the entrance of Emperor Meiji into the city does, in a major way.[6]

When the anti-shogunate forces marched on the city, he decided to surrender, and troops entered the city peacefully on 1868/4/11. Yoshinobu was confined in Mito for a while as an enemy of the Court. He took up residence there at the old domain academy just outside the moats of Mito castle.[7] Later, he settled in Sunpu (Shizuoka-ken), the city where Ieyasu had retired to. In 1897, he moved to Tokyo, He was made duke (kôshaku, 公爵) in 1902.

Following his death, Yoshinobu was not enshrined and entombed like his predecessors, at either Kan'ei-ji or Zôjô-ji, but was instead buried in Yanaka Cemetery, in a still grand but comparatively ordinary burial.