From SamuraiWiki
(Redirected from Matsudaira Yoshinaga)
Jump to navigationJump to search 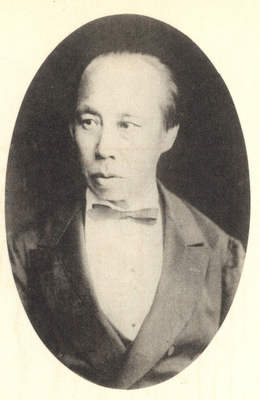 Matsudaira Shungaku, as seen in a photo in the 1942 reprint of the Tokugawa reiten roku

Matsudaira Shungaku was the last daimyô of Echizen han, and played a prominent role in Bakumatsu politics.

In 1862, Shungaku received a document containing "three emergency measures" from Kiyokawa Hachirô. He then formed the Rôshigumi, hiring a group of ronin to help guard Shogun Tokugawa Iemochi on a 1863 trip to Kyoto. In conjunction with these responsibilities, Shungaku was named seiji sôsaishoku, a high-ranking government oversight position.

Shungaku is known to have been an avid collector of ukiyo-e woodblock prints, and it has been suggested that the production of pictorial records of Iemochi's trip to Kyoto by ukiyo-e artists rather than by those of the Kanô school may have been his idea.[3]

In the last years of the Bakumatsu period, Shungaku, along with Yamauchi Yôdô, were among those who debated the possibility of a more democratic form of government, based on public opinion.

In 1870, Shungaku invited William Griffis to Japan, to teach physical sciences as an oyatoi gaikokujin.

In 1881, he helped compile the Tokugawa reiten roku, alongside Ikeda Mochimasa and Date Munenari.[4]

Shungaku's son Tokugawa Yoshichika was adopted into the Owari Tokugawa clan, and succeeded Tokugawa Yoshikatsu to become the head of that branch house.