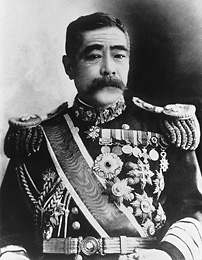 Tsugumichi was a younger brother of Saigô Takamori. During the Bakumatsu Period, he had a distinguished military career, fighting in battles across Japan, including in the 1863 Satsuma-England War and the 1868 Boshin War. After the Meiji Restoration, he was appointed a general of the Imperial army, and led the Tokyo military garrison. In 1873, Tsugumichi and his brother Takamori had a strong disagreement over the proposed invasion of Korea (Takamori argued for invasion, whereas Tsugumichi was against it), and eventually had a falling out, with Takamori resigning from government.

Tsugumichi led a Japanese invasion of Formosa (Taiwan) in May, 1874 (Taiwan Expedition of 1874), securing a treaty with Qing Dynasty China by the end of the following month.

In 1876, Tsugumichi was appointed the vice commissioner of the Japanese section of the World's Fair, held in Philadelphia, Pennsylvania.

In 1877, when the Satsuma Rebellion broke out, Tsugumichi wanted to take up arms against his brother, however the government declined his request. He did supply the Imperial army with food and ammunition from Tokyo during the rebellion, which contributed to the Imperial victory.

He died in 1902 at the age of 60. A mansion in the Meguro district of Tokyo which he had originally purchased for his brother (prior to Takamori's death in 1877), was used as a secondary family villa up until 1900, and after that became the family's chief Tokyo residence until 1941.[1]