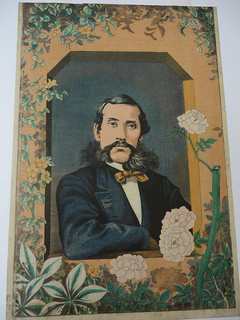 Ôkubo Toshimichi, in a woodblock print by Kobayashi Kiyochika. Sackler Gallery of Art.

Ôkubo Toshimichi, a samurai originally from Satsuma han, was one of the three top planners and organizers of the Meiji Restoration, along with Kido Takayoshi and Saigô Takamori. After the overthrow of the shogunate, he became the head of the Home Ministry, and took charge of a great many affairs associated with running the new "modern" state. He argued against invading Korea in 1873, and took part in the Iwakura Embassy which traveled the world and visited a great many governments in 1871-1872.

He was a son of Ôkubo Toshiyo, a Satsuma official who at one time served as an official attached to the Ryûkyû-kan. As a result, Toshimichi is known from his diary to have on occasion eaten pork, an exceptional rarity for Japanese of the Edo period.[1]

Following the assassination of Ii Naosuke in the 1860 Sakuradamongai Incident, Toshimichi unsuccessfully tried on several occasions to get loyalists (supporters of those who planned and committed the assassination) incorporated into the sankin kôtai entourage of lord of Kagoshima domain Shimazu Mochihisa.[2]

After successfully arranging for the Ryûkyû Kingdom (then, already known as Ryûkyû han) to come under the jurisdiction of his Home Ministry (Ministry of the Interior), and no longer under the Ministry of Foreign Affairs, in 1874, in March 1875, Home Minister Ôkubo first articulated a plan to fully abolish the kingdom and to fully absorb its territory into Japan's "home" territory. Later that same month (March 1875), the government rejected suggestions to implement some form of colonial administration, in favor of Ôkubo's plan, albeit with some changes. One of the key changes was that Ôkubo's plan had included that the former royal family would hold the governorship of Okinawa prefecture as a hereditary post; this was not implemented, and former samurai were instead appointed Governor of the prefecture, while the former royal family was removed to Tokyo. Ôkubo also criticized the continuation of Ryukyuan tribute relations with China, which had continued, briefly, in the early Meiji period, but ended soon afterwards.

Ôkubo was assassinated on 1878/5/14, and was replaced as Minister of the Interior by Itô Hirobumi.