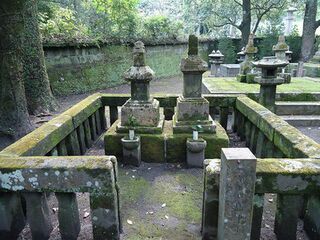 Shimazu Tadakuni was the ninth head of the Shimazu clan.

The son of Shimazu Hisatoyo, he was born at Mukasa castle in Hyûga province. He succeeded his father as shugo of Satsuma, Ôsumi, and Hyûga provinces in 1425. Five years later, he pursued Shimazu Hisamori to his death; Hisamori killed himself at Tokumitsu castle, marking the end of the Sôshû branch of the Shimazu, started by Shimazu Morohisa in the 1360s. This secured the dominance of Tadakuni's Ôshû branch, begun by Morohisa's younger brother Shimazu Ujihisa, over all three provinces, and established the Ôshû branch as the chief Shimazu lineage.

When Ashikaga Gishô lost the shogunal succession, and fled to Fukushima-in in Hyûga, Takakuni received orders from the Ashikaga shogunate to lead the punitive mission against him. A legend which emerged in later times has it that Tadakuni was named lord of Ryûkyû as a reward for successfully forcing Gishô's suicide (or assassinating him). No Shimazu ever exercised direct political control over Ryûkyû or deployed administrators there until the 17th century; however, at that time, the Shimazu claimed suzerainty over the islands stretching back to Tadakuni's grant from the shogunate in 1441.

Meanwhile, within the Shimazu domains, the Nejime and Kimotsuki clans continued to stand in rebellion, and once Tadakuni's younger brother Shimazu Mochihisa was appointed shugodai of Satsuma province, he gained in power and also stood against Tadakuni. The shogunate later weakened the power of Mochihisa, however, and the two brothers reached a rapprochement by 1448. Opposed also by his son Shimazu Tatsuhisa, Tadakuni retired to Kaseda, and is sometimes said to have then fled to Ryûkyû.

Tadakuni died in 1470, at the age of 68. He was succeeded as head of the Shimazu clan by his second son Shimazu Tatsuhisa. His two other sons were Shimazu Hisayasu and Shimazu Tomohisa. Tadakuni is buried at the Shimazu clan cemetery at Fukushô-ji in Kagoshima, alongside his wife.