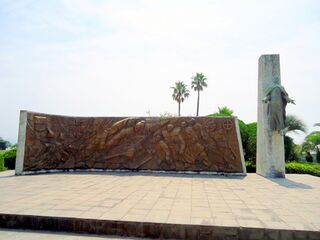 Monument in Kagoshima to Xavier's arrival there in 1549

Francis Xavier was a Basque co-founder of the Society of Jesus, who traveled in Asia and helped found the Jesuit mission in Japan.

Originally from the Basque region of Spain, Xavier earned a master's degree and taught at the University of Paris before becoming one of the founding members of the Jesuit order.[1] He left Portugal for Asia in 1541, and in December of 1547, while living in Malacca, Xavier became acquainted with Anjirō, a Japanese living abroad who converted to Christianity.

He then journeyed to Japan in 1549, along with two other Jesuits, Cosme de Torres and Juan Fernández, arriving in Kagoshima, where he received permission from Shimazu Takahisa to proselytize. After forming a friendship with Ninshitsu, head of the Shimazu clan temple of Fukushô-ji, he helped found the first Catholic mission in Japan, and converted roughly one hundred local people. Roughly a year after arriving in Kagoshima, he relocated to Hirado in the spring of 1550. He then moved on to Chôshû, where he assisted his fellow Jesuits preaching in the streets.

During his missionary work, Francis Xavier sent back many letters and other documents which have proved an important look at European views of Japan and Asia at that time.

When he left Japan in 1551, he took with him a few young Japanese converts, who then traveled with him in India and elsewhere. One, known by the Christian name Bernardo, was granted an audience with Pope Paul IV and is very likely the first Japanese to have ever set foot in Europe.[2]