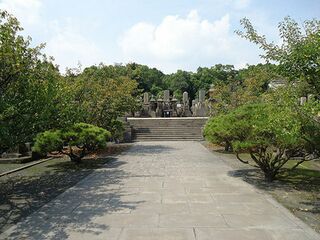 The view of the cemetery as one approaches from the entrance 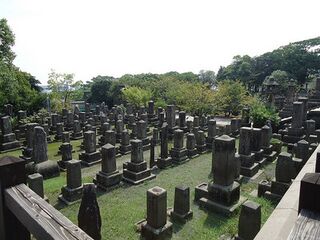 The Nanshû Cemetery in Kagoshima is the final burial place for Saigô Takamori and 2,022 other men who died in the 1877 Satsuma Rebellion fighting against the Imperial Japanese Army. It is located on the former grounds of the Buddhist temple Jôkômyô-ji, up on a hill, overlooking a major avenue which formerly housed a number of Shimazu clan mansions.

Following Saigô's death at the battle of Shiroyama, Kagoshima prefecture governor Iwamura Michitoshi had him and forty of his men buried on the former grounds of Jôkômyô-ji, a temple which had been destroyed in the 1863 bombardment of Kagoshima by the British Royal Navy, and abolished in the haibutsu kishaku anti-Buddhism policies of the first years of the Meiji period. Two years later, in 1879, the remains of a number of Saigô's men who had initially been buried elsewhere were relocated here, and six years after that, remains of others who fell in the rebellion were relocated from graves in neighboring prefectures.

Saigô's grave stands in the center of the cemetery, with those of Kirino Toshiaki, Beppu Kagenaga, Katsura Hisatake, Murata Shinpachi, Shinohara Kunimoto, and Ôyama Tsunayoshi Kakunosuke immediately nearby, along a row. These, along with many of the other graves today have modern signs identifying the figures buried there. With the exception of a few sections in the very front of the cemetery, all of the gravestones are organized in neat rows, all facing forward; this, in contrast to the arrangements typical in other cemeteries, where gravestones might point inwards towards the walking paths, on both sides, or might face a variety of directions. At the front of the cemetery stands a stone monument to governor Iwamura, along with a stone inscribed with an epitaph for Saigô written by Katsu Kaishû, and a stone lantern gifted to the site by the City of Tokyo in 1939, in gratitude for the bloodless way in which Edo castle was taken during the Meiji Restoration. Another stone, a gift to the city from Changsha, stands as a monument to Huang Xing, a major figure in the 1911 Xinhai Revolution, described here as the "Saigô Takamori of China." A bamboo garden directly behind the cemetery was established in memory of Satsuma han daimyô Shimazu Yoshitaka (r. 1704-1721).

A building was constructed on the site in 1879 to help commemorate the war dead; in 1922 it was officially designated as Nanshû Shrine (Nanshû jinja), enshrining the spirit of Saigô Takamori. Jôkômyô-ji has been reestablished and stands immediately neighboring the cemetery today, along with the Saigô Nanshû Memorial Hall (Saigô Nanshû kenshôkan) museum/archives.