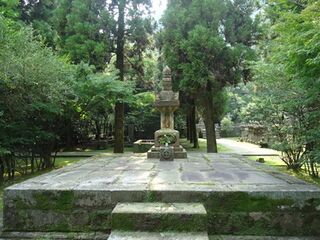 Grave of Shimazu Yoshitaka at Fukushô-ji in Kagoshima

He was named Chamberlain (jijû) in 1689 and Minor Captain in 1704, with the court rank of Lower Junior Fourth Rank. He was then elevated to the title of Middle Captain and the rank of Upper Junior Fourth Rank in 1710, on the occasion of a Ryukyuan embassy to Edo, before being raised to the Lower Senior Fourth Rank in 1714, keeping his title of Middle Captain, on the occasion of a second Ryukyuan mission. Yoshitaka escorted a third Ryukyuan mission to Edo in 1719, but was not elevated in rank again at that time.[1] Even so, this was the second highest rank any Shimazu lord achieved during the Edo period; Yoshitaka was matched only by Shimazu Narioki, and exceeded only by Shimazu (Tadatsune) Iehisa.[2]

He was succeeded by his son Shimazu Tsugutoyo. Two of his other sons, Shimazu Tadaakira and Shimazu Tadanori, became heads of the Imaizumi and Shigetomi branch families, respectively.