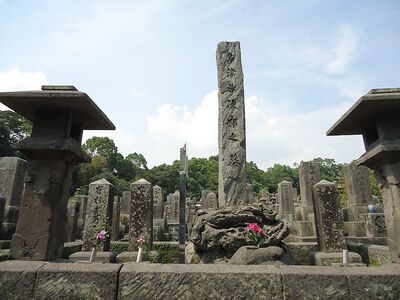 Shimazu Keijirô was a Satsuma han samurai who fought and died in the Satsuma Rebellion.

He was the third son of Shimazu Tadahiro of the Sadowara branch of the Shimazu clan, and studied overseas in the United States for about seven years, from 1869 until 1876, when he returned to Japan and joined the Freedom and People's Rights Movement (Jiyû minken undô). In the 1877 Satsuma Rebellion, he fought alongside the 500-man Sadowara army, dying in the Battle of Shiroyama on September 24th that year at the age of 21, alongside his followers Mishima Mitsugu (age 38), Nakamura Michiharu (age 26), and Arimura Takehide (age 20). They were buried together at the Nanshû Cemetery.