The Satsuma Rebellion which took place in 1877 was the most famous, and the final major instance out of a series of shizoku rebellions led in the late 1870s by former samurai of southwestern Japan against the prospect of the Meiji government abolishing their elite status and the rice stipends which had traditionally been the samurai's chief or sole source of income. Known in Japanese as the Seinan Sensô, or "Southwestern War," the rebellion was led by Saigô Takamori of Satsuma han (Kagoshima prefecture), and involved roughly 15,000 former samurai facing off against around 100,000 Imperial Japanese Army troops. 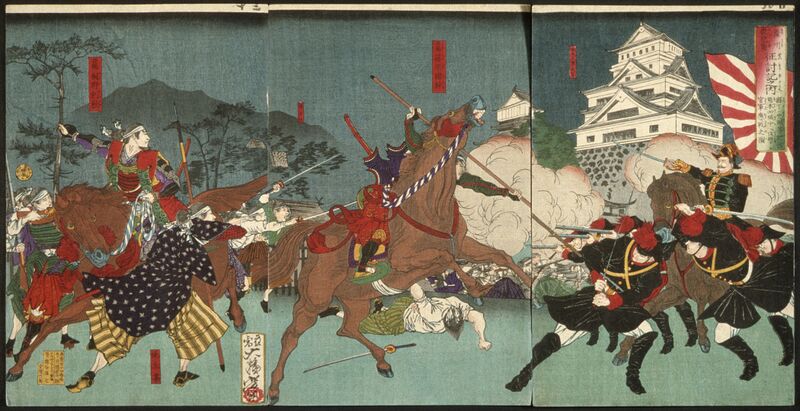 "Battle before Kumamoto castle," by Tsukioka Yoshitoshi, 1877. LACMA. Kirino Toshiaki can be seen in the left panel, and Shinohara Kunimoto in the center.

Following the Seikanron in 1873, in which Saigô's desires to invade Korea were overruled by other members of the inner circles of government, Saigô resigned from the government and returned to Satsuma, where his private academy became a center for samurai discussions of displeasure with the government.

When former samurai (shizoku) rose up in separate rebellions in Hagi, Akizuki, and Kumamoto in 1876, Saigô spoke of his moral support for these rebellions, but remained uninvolved.

In February 1877, Saigô and his men heard rumors that the Meiji government was planning an assassination of Saigô. Gathering allies along the way, the Satsuma rebels moved into action, and began to make their way north, with intentions of seizing Kumamoto castle. Saigô was officially named a rebel by the Meiji government on February 20, and his army of roughly 15,000 former samurai reached Kumamoto two days later, marching on the castle amid the worst snowstorm in some fifty years.[1] Though they succeeded in destroying many of the castle's major buildings, they were ultimately unsuccessful in taking the castle; their siege of Kumamoto castle was brought to an end by a massive force of Imperial Japanese Army soldiers in early March, but despite suffering as much as 90% losses, Saigô's men retreated to Kagoshima via Hitoyoshi, Miyazaki, and Nobeoka, and continued to fight until September.

On September 14, Saigô and the last three hundred of his men finally succumbed, committing ritual suicide rather than be killed by the roughly 50,000 government troops who still faced them.

The rebellion has been described as the last gasp of the samurai, and as a defining or culminating event in the establishment of military conscription and of the Imperial Japanese Army.

The 2003 Tom Cruise movie "The Last Samurai" is loosely based upon the events of the Satsuma Rebellion, but is largely ahistorical.