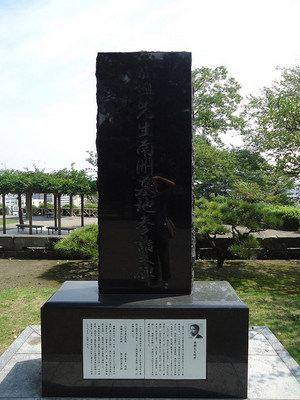 A monument to Huang Xing at the Nanshû Cemetery in Kagoshima

Huang Xing was a prominent figure in China's 1911 Xinhai Revolution. He is sometimes referred to as the Saigô Takamori of China.

Born to a scholarly family in Changsha, he was well educated in calligraphy, poetry, and other elite arts. He traveled to Japan in 1902 to study at Kôbun Gakuin, and there became involved in the "Society for the Revival of China" (華興會, Huáxīng Huì), a group discussing possible democratic revolution against the Manchu Qing Dynasty. He also engaged with Sun Yat-Sen's "Revive China Society" (興中會, xīng zhōng huì) while there.

In 1909, he was invited to Kagoshima by Miyazaki Tôten. While there, he visited the Nanshû Cemetery, and famously composed a poem about the experience, and about his admiration for Saigô Takamori; a monument to Huang stands today in the cemetery.