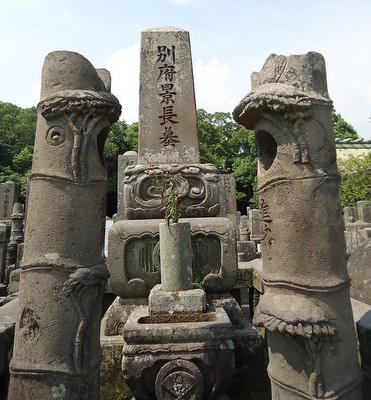 Grave of Beppu Kagenaga at the Nanshû Cemetery in Kagoshima

Beppu Kagenaga was a Satsuma han warrior perhaps best known for having served as the kaishakunin ("second") who beheaded Saigô Takamori as Saigô performed seppuku.

Beppu briefly held the rank of Konoe Shôsa in the Imperial Japanese Army, but resigned from the military in 1873 to return to Kagoshima, where he became mayor of Kajiki.

He led Satsuma coalition forces #6 and #7 during the Satsuma Rebellion. During the battle of Shiroyama, on Sept 24, 1877, Saigô Takamori was shot and decided to commit suicide, asking Beppu to act as his second. Beppu was himself killed later that same day, at the battle of Iwasakidani, and is buried at the Nanshû Cemetery in Kagoshima.