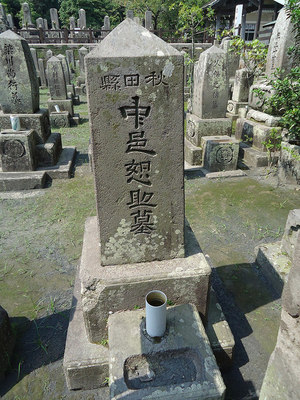 Grave of Nakamura Josuke at the Nanshû Cemetery in Kagoshima

Nakamura Josuke was an Imperial loyalist, originally from Akita prefecture, who turned against the Meiji government, and died in the Satsuma Rebellion.

Initially involved in loyalist (shishi) circles in Kyoto, he was arrested and sentenced to life imprisonment in 1870. As the Satsuma Rebellion began in 1877, however, he applied to join the rebel army, and was released by Kagoshima prefecture governor Ôyama Tsunayoshi.

He died in battle at the age of 34 at Hotakubo, outside of Kumamoto castle, on April 20, 1877, and is buried at the Nanshû Cemetery.