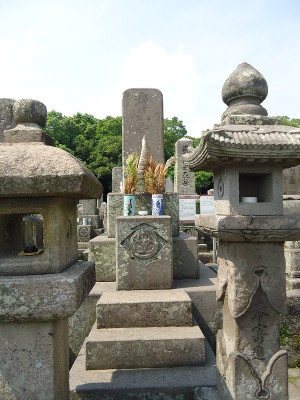 Grave of Henmi Jûrôta at the Nanshû Cemetery in Kagoshima

Henmi Jûrôta was a commander of Satsuma forces in the Satsuma Rebellion.

Briefly holding the rank of Captain (taii) in the Imperial Japanese Army, he resigned and returned to Kagoshima along with Saigô Takamori in 1873.

During the Satsuma Rebellion, he led one portion of the third battalion, and is known for leading the attempt to breakthrough at Enotake, and for continuing to fight despite suffering a head injury.

During the battle of Shiroyama, Henmi followed Saigô and Beppu Kagenaga to Iwasakidani, where he was killed in battle.