Former Shogun Tokugawa Yoshinobu moved to Ôsaka castle from Nijo castle after Ôsei Fukko in December 1867. Satsuma needed to lure the Tokugawa into war in order to destroy the power of the Bakufu, so they had Rônin terrorize Edo. This had the desired effect when Bakufu forces in Edo burnt down the Satsuma mansion there. On 1868/1/2 Bakufu retainers left Osaka for Kyoto to subdue the forces of Satsuma. Bakufu Loyalist forces numbered around 10,000~15,000. They were opposed by pro-Imperial forces of about 3500~5000 which were advancing upon Fushimi from the north. Most of these troops were from Satsuma, but contingents from Tosa and Chôshû were also present. 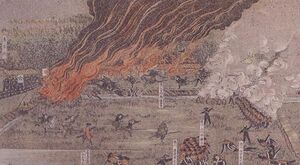 The battle started near Koeda bridge in Toba. Satsuma's units fired at the Bakufu troops. The Bakufu's commander believed that Satsuma would yield the way when confronted with his 10,000 troops. Therefore, despite the enemy fire, the Bakufu were not expecting a battle and did not engage the Satsuma forces.

The battles in Toba and Fushimi continued. On Jan 5, Emperor Meiji gave the Imperial flag and a sword to prince Ninnajinomiya Yoshiaki who was chosen to be the commander of the Imperial troops. When the flag appeared at the front line, it confused the forces of the Bakufu. The Imperial banner in effect changed the entire situation, now establishing the Satsuma forces as the Imperial Army. Any attack against them would now be seen as an attack on the Emperor and the Bakufu would be branded as rebels. Many Bakufu troops ran off rather than do this.

The defeated Bakufu troops tried to enter Yodo castle. The castle was the residence of Inaba Masakuni who was Rôjû (High ranking Bakufu retainer). Inaba was in Edo at the time. The castle refused to open the gate and the Bakufu troops had to retreat to the South. 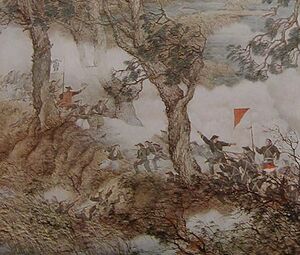 The Tôdô clan of Tsu han also betrayed the Bakufu and Aki han joined the Imperial troops. The betrayals shocked the Bakufu forces, and they became demoralized and defeatist. This was compounded when the ‘fencesitters’ Gosanke and many Western han decided to take the Imperial troop side. When the Bakufu troops retreated to Ôsaka, their master Tokugawa Yoshinobu was already gone. Matsudaira Katamori, Matsudaira Sadaaki, Itakura Katsukyo (Rôjû), and Sakai Tadato (Rôjû) also escaped from Ôsaka castle secretly and took a ship to Edo. This came as a shock to the Bakufu troops. The exit of their leadership further sapped their will to fight.

This article is a rough draft which is in need of cleanup (grammar, spelling, corrections, links, formatting, etc.). You can help SamuraiWiki by editing it. Click here for a list of articles that have been tagged as a draft copy.
Retrieved from "http://samurai-archives.com/w/index.php?title=Battle_of_Toba-Fushimi&oldid=43851"
Categories: