From SamuraiWiki
(Redirected from Jesuits)
Jump to navigationJump to search 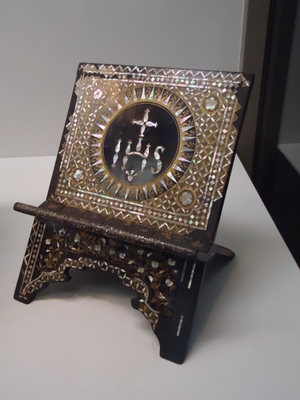 A lacquered reading stand inlaid in mother-of-pearl with the IHS logo of the Society. Tokyo National Museum, 16-17th c.

The Society of Jesus, also known as the Jesuit order, was one of the chief arms of the Catholic Counter-Reformation in Europe, and one of the earliest and most prominent groups of Christian missionaries to be active in Japan.

The order was founded by Ignatius Loyola (1491-1556), and before long boasted bases in Lisbon, Rome, and Paris, among other European cities, as well as missions in North and South America, India, and China.[1]

The first Jesuits to arrive in Japan included Francis Xavier, and arrived in Japan in 1549, a mere nine years after the founding of the order. They founded the first Jesuit mission in Japan in that year, in Satsuma province, before moving on to Hirado in 1550, and then to Nagato province (Chôshû), often proselytizing in the streets. While European merchants generally limited their own activities to the ports of Kyushu, and particularly to Hizen province and Nagasaki, the missionaries delved deep into the country; few of the archipelago's sixty provinces went wholly untouched by missionary influence.[2]

Though appalled by Japanese practices of sodomy and pederasty, and of course wholly disapproving of Buddhism and Shinto as "pagan" religions, the Jesuits for the most part, at least initially, held rather positive views of the Japanese. Jesuit Visitor (i.e. supervisor) Alessandro Valignano wrote of the Japanese as "white, courteous, and highly civilized," and wrote of their dignity, cleanliness, rationality, and a host of other positive traits.[3]

At Valignano's suggestion, the Jesuits took great pains to adapt to Japanese culture, including learning to sit in a Japanese style, to speak Japanese, and even to properly formally entertain guests with tea ceremony. They struggled to some extent with the Japanese custom of daily baths, due not only to European beliefs at the time associating bathing with the danger of illness, but also because of religious or cultural associations drawn between dirt and lice and the monastic vow of poverty. Further, not all Jesuit missionaries in Japan agreed with this policy, or with Valignano's positive view of the Japanese people; Francisco Cabral, for one, reportedly found Japanese culture to be "conceited, covetous, inconstant, and insincere," and so "unpalatable that he even refused to drink tea."[4]

The Jesuits gained allies relatively quickly among the daimyô and other prominent figures in Kyushu, including winning a number of converts among the Kyushu elite. Christianity suited samurai lords well, as missionaries emphasized sacrificing oneself for the Lord – and with the daimyô himself as divinely mandated, loyalty to God became intertwined with loyalty to one’s earthly lord. The Jesuits had difficulties, however, explaining the differences which separated their religion from Buddhism, with many potential converts confusing or conflating the Christian God and/or Jesus with Dainichi (Vairocana, the cosmic Buddha), and the Christian Heaven with the Buddhist Pure Land. Some Jesuit missionaries even wrote that the Devil himself "had deliberately fashioned Buddhism to resemble the true faith so as to confound and confuse the people."[5]

Their first successful daimyô convert was Ômura Sumitada, in 1563; in 1580, he ceded the Society the port of Nagasaki, including the power of judicial authority within that space. Ôtomo Sôrin welcomed the Jesuits into his domain (Bungo province) as guests, and allowed them to establish a mission there in 1551 (along with a hospital in 1557), though he did not himself choose to be baptized until 1578.

A seminario, or Jesuit school for Japanese youths, was established at some point, and from the 1580s until 1614 a painting workshop operated on the grounds, training Japanese in European painting techniques, and producing artworks for the Christian churches and missions in Japan. In addition, a chapel was built in Kyoto in 1561, and came to be called by the Japanese Nanban-ji (lit. "Southern Barbarians Temple"). Missionaries continued their efforts even while suffering persecution, and with the protection of Oda Nobunaga, the number of their followers grew. In 1576, several hundred followers, with the support of the Kyoto shoshidai Murai Sadakatsu, had the old worship hall rebuilt, and on 7/16 held a mass to celebrate the completion of the new chapel. Nanban-ji was then renamed to also be known as St. Mary's Temple (珊太満利亜上人). There were perhaps as many as 150,000 Japanese converts to Christianity by 1582,[6] and more than 300,000 Japanese Christians in Japan in 1614 according to some estimates, a greater percentage of the total population than the percentage of Christians in Japan today.[7] Women were formally banned from the Order as early as 1549, and officially Jesuits were banned by the Papacy from "work[ing] regularly with women." Nevertheless, many female converts played notable roles in proselytizing to their fellow Japanese or otherwise supporting or promoting the Jesuit mission.[8]

However, in 1587/6, after completing his Invasion of Kyushu, Toyotomi Hideyoshi seized back Nagasaki from the Jesuits,[9] and issued the first of his Christian Expulsion Edicts. Nanban-ji was destroyed, and never rebuilt.[10] Still, Hideyoshi did little to actually enforce this expulsion edict, and so for a brief time, the Jesuits continued on, in a tenuous but not wholly dangerous position. 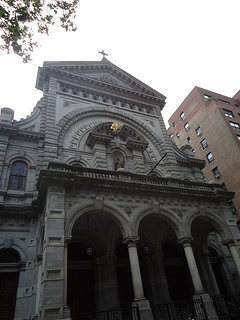 The Church of St. Francis Xavier in New York City

Despite early successes, or perhaps because of them, from the 1580s on, the Jesuits began to face increasing suspicion and difficulties. Prominent figures such as Hideyoshi, and, later, Tokugawa Ieyasu, aware of Spain's colonization of the Philippines, and of the incredible numbers of Christian converts within Japan, and having only very recently united the warring provinces of Japan into a semblance of peace and order, became concerned that the missionaries' activities could lead to a return to serious instability, or even conquest and colonization.

Concerns were raised that according to Christian doctrine, loyalty to God and to the Pope superseded loyalty to one's lord, to the shogun, or even to the Emperor of Japan, and that further, according to Christian teachings, even figures such as the Sage Kings of Yao and Shun, revered as the ideal Confucian rulers, would be doomed to hell for their pagan beliefs and actions. The perceived threat was thus not only one to political stability, but a threat to the basic social structure.[11]

These concerns were encouraged further by Dutch and English representatives - Protestants whose home countries were embroiled in passionate religious wars with Catholic Spain & Portugal. Meanwhile, the Franciscan Order arrived in Japan in 1594, and began proselytizing not to the elites, but to the common people, drawing concern from Hideyoshi, Ieyasu and the like that this might disrupt the social order. The Jesuits and Franciscans had rather different approaches, and held hostile attitudes towards one another, with the Franciscans considering the Jesuits pretentious for their associations with the elites, and the Jesuits ridiculing the Franciscans for their lack of education, poverty, and association with the lowest rungs of society. Political/economic competition between the Portuguese and Spanish active in Japan also contributed to Japanese concerns about factionalism and instability. The Dominican and Augustinian Orders then arrived in 1602, creating additional competition for the Jesuits. In 1608, these various orders succeeded in getting a reversal of the papal bull which granted the Jesuits exclusive rights to proselytize in Japan; from 1608 onward, these other orders were no longer officially forbidden by the Papacy from engaging in missionary activities in Japan. Even so, none of these groups ever commanded nearly as many converts as the Jesuits; by around 1612, the Jesuits claimed some 600,000 Kirishitans in their following, while the other orders each claimed only around 13-14,000.[12]

Disturbed by these various factional clashes, European arrogance, and the threat of violence or colonization, Hideyoshi, and later Ieyasu, gradually turned against the Christians. By the end of the 1630s, more than 3000 Japanese, and nearly 70 Europeans killed in Japan, would be formally recognized as martyrs by the Vatican, though of course many more killed for their faith were not recognized in this fashion. One particularly well-known and commemorated set of martyrs are the so-called "Twenty-Six Martyrs of Nagasaki," a combination of European missionaries and Japanese converts, killed at the orders of Toyotomi Hideyoshi in 1597; according to some accounts, the boasting of the Spanish captain of their ship, the San Felipe, as to the great power of the Spanish king, and/or boasting that the missionaries were a sort of vanguard for an invasion of Japan,[13] was a key factor in Hideyoshi ordering this done. The Tokugawa outlawed Christianity in 1606, and began to expel missionaries from shogunate territory in earnest in 1612,[14] and from the entire realm in 1614. There were perhaps around 150 European missionaries active in Japan at that time, though the number of Japanese faithful was far greater.[15] The Spanish were expelled entirely in 1624, and Japanese were forbidden from going overseas (or returning from overseas) in 1633.

The nail in the coffin for missionary presence and activity in Japan was, arguably, a Christian uprising at Shimabara in 1637-1638, in which tens of thousands of Christians rebelled against their lord; roughly 37,000 Christians were killed before the rebellion was over. The event was seen by the shogunate as evidence of the divided loyalties of Japanese Christians, and a spectre of rebellions, divisions, and instability which would continue if Christianity were not violently and powerfully suppressed.

Missionaries were expelled finally and entirely in 1639, and Christianity banned. Representatives of the Dutch East India Company, merchants with little interest in proselytizing, were now the only Europeans allowed direct intercourse with Japan, and as of 1641, they were restricted to the tiny manmade island of Dejima in Nagasaki. Mancio Konishi (b. 1600), a Japanese convert who was ordained in Rome and returned to Japan in 1632, may have been the last remaining Catholic priest in Japan when he was finally captured and killed by the authorities in 1644.[16] Many Japanese lay converts remained, however, as so-called "hidden Christians" (kakure Kirishitan), some finding success in hiding in remote areas, such as the island of Ojika off Nagasaki, where a kakure Kirishitan church still stands. At least one Jesuit is known to have snuck into Japan during this period of maritime restrictions: Giovanni Battista Sidotti entered Japan in 1708, was interrogated by Confucian scholar & chief shogunal advisor Arai Hakuseki, and was imprisoned, dying in his cell in 1714.

Once the ban on Christianity was lifted, in the Bakumatsu Period, the Jesuit order re-entered Japan, and retains a degree of presence today; Sophia University in Tokyo, founded in 1913 at the request of the Pope as the first Jesuit university in Japan, is generally regarded as among the top three private universities in the city.