Toyotomi Hideyoshi's Kyûshû Campaign of 1587 was part of his efforts to gain control of Japan at the end of the Sengoku period. Having subjugated much of Honshû and Shikoku, and with his eye on invading Korea, Hideyoshi turned his attention to the southernmost of the main Japanese islands, Kyûshû, in 1587.

Battles had raged for the previous few years between the daimyô of Kyûshû, and by 1587 the Shimazu clan of Satsuma were the primary power on the island. In 1586, hearing of Hideyoshi's plans for invasion, they lifted their siege of Tachibana castle, withdrawing a great portion of their forces back to Higo province, while the rest stayed in Bungo province. There, they seized Funai castle from the Ôtomo clan and prepared for the invasion.

The Ôtomo were supported by armies under Sengoku Hidehisa and Chôsokabe Motochika, a major Shikoku lord who had been defeated by Hideyoshi the previous year, and had thus been pressed into service. Though Bungo province ultimately fell to the Shimazu, the Sengoku and Chôsokabe delayed the Shimazu in 1586, defeating and weakening them, in preparation for the arrival of Hideyoshi's armies and those of the Môri clan, another of Hideyoshi's allies. Shimazu Tadatsune (Iehisa) suffered significant losses at the hands of the Chôsokabe at the battle of Hetsugigawa in that year. Afterward, Iehisa pursued the Ôtomo to Usuki castle, but once Hideyoshi and his brother Hashiba Hidenaga made landfall, the Shimazu were forced to pull back. 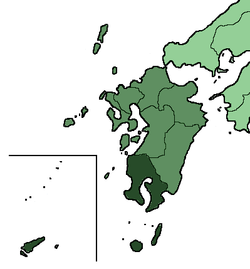 The island of Kyûshû, with modern-day Kagoshima prefecture, roughly corresponding to the Shimazu clan's home province of Satsuma highlighted.

Hidenaga landed to the south of Bungo, attacking the Shimazu at Takajô, on Kyûshû's eastern coast, in 1587. Meanwhile, Hideyoshi took his own forces down a more westerly route, attacking Ganjaku castle in Chikuzen province, which was held by the Akizuki clan. The lords of northern Kyushu lost the decisive battle at battle of Nejirozaka, and from then on, the Shimazu found themselves defeated in one battle after another.

Eventually, the two Hashiba/Toyotomi forces met up in the Shimazu home province of Satsuma, intending to assault the Shimazu home castle at Kagoshima if the Shimazu did not surrender. Ultimately, however, Shimazu Yoshihisa submitted to Hideyoshi's authority, taking the tonsure and formally surrendering at Taihei-ji in Satsuma Sendai, and Kagoshima was not attacked. Having secured his dominion over Kyushu, Hideyoshi was now free to return his attention to the Hôjô clan of the Kantô, the last major clan in the realm to oppose him.

Hideyoshi would make use of Kyûshû through much of the 1590s in his attacks on Korea.

Battles of the Kyûshû Campaign