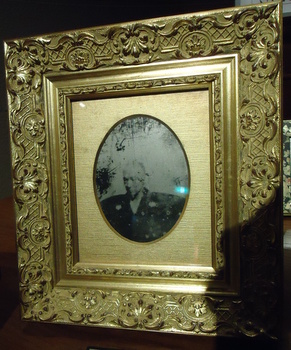 Daguerreotype photograph of Nariakira taken by Ichiki Shirô in 1857. The oldest known surviving photograph by a Japanese photographer. Important Cultural Property. On display at the Museum of the Meiji Restoration 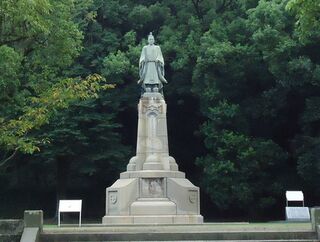 Shimazu Nariakira was daimyô of Satsuma han from 1851 until his death in 1858, and a prominent and influential figure in the domain's policies even prior to that, when his father Shimazu Narioki was Lord of Satsuma. Viewed retrospectively from the circumstances of the Bakumatsu and Meiji periods, Nariakira and his supporters have been characterized as "progressive" or "radical" in contrast to the "conservative" positions and policies of his father, and his faction. Nariakira is also known as the adoptive father of the famous Atsu-hime, who he married to Shogun Tokugawa Iesada in 1856.

Nariakira is said to have been particularly intelligent and well-educated. His education and training was guided by his great-grandfather Shimazu Shigehide, and by his mother Kenshôin. He studied Western subjects under Aoki Shûtei and Ogata Kôan, and later invited a number of scholars, including Takano Chôei, Kawamoto Kômin, Itô Genboku, Tsuboi Shindô, Totsuka Seikai, and Matsuki Kôan to come to Satsuma to produce translations of Western books, and to perform scientific experiments in order to advance knowledge and technology in Satsuma.[1] He was raised to the rank/title of shôshô (Lower Captain) in 1834, a rank/title which for the Shimazu normally coincided with being named heir.[2]

Born and raised in Edo, Nariakira had a relatively weak power base in Satsuma, but was able to work more closely with both Satsuma and shogunate officials in Edo, such as the powerful rôjû Abe Masahiro, to effect certain policies or agreements. In 1846, he negotiated with Abe to implement positions and policies suggested by Satsuma advisors Godai Hidetaka and Zusho Shôzaemon for defending Ryûkyû from Western encroachment; in order to make sure these plans would be implemented, Abe had Shogun Tokugawa Ieyoshi place Nariakira, and not the daimyô his father, in charge of overseeing the defense of Ryûkyû.[3] Nariakira would later also develop strong relationships with Tokugawa Nariaki, lord of Mito han; Matsudaira Shungaku of Echizen han; Tokugawa Yoshikatsu of Owari han; Yamauchi Yôdô of Tosa han; and Date Munenari of Uwajima han.[1]

Amidst the Western incursions of the late 1830s or early 1840s, and with the support of the shogunate, Nariakira returned to Satsuma, and began directly effecting the enhancement of coastal defenses, among other activities, to the resentment of his father's faction, including his father's chief advisor, Zusho. As a result of the tension between these two factions within the domain government, Nariakira and Zusho went about implementing their plans separately, sometimes at odds with one another, and sometimes acting redundantly, not discussing their plans with one another. Nariakira's power within the domain ebbed and waned as he and his father exchanged places, traveling between Kagoshima and Edo.[3]

Tensions between the two factions heated up as Nariakira schemed against his father. In 1848/8, he revealed to certain influential daimyô secret plans proposed by Zusho Shôzaemon, which led to Zusho committing suicide four months later, in order to protect his lord, Narioki. Meanwhile, Narioki promoted Nariakira's half-brother, Shimazu Hisamitsu, to high positions within the domain government in order to counteract Nariakira's own influence. In late 1849, hearing rumor of a plot by Nariakira to organize the assassination of Hisamitsu and his mother Yura, Narioki had around forty members of Nariakira's faction rounded up, and either exiled or forced to commit suicide.

With the support of his great-uncle Kuroda Narihiro of Fukuoka han and Date Munenari of Uwajima han, however, Nariakira was ultimately able to have Abe Masahiro pressure his father to step down as daimyô, with Nariakira succeeding him in 1851/2 at the age of 43.[4] He returned to Kagoshima for the first time in 16 years to take up this position as lord of the domain.[5]

The same year as he became daimyô, Nariakira ordered construction to begin on two ships, the Iroha-maru and Ottosen, as tests. The Shôheimaru, a Western-style tall-masted sailing ship, was completed in 1853-1854, and the first successful Japanese-built steamship, the Unkômaru, in 1855. Not an entirely new ship, the Unkômaru was the Ottosen, but refitted with a steam engine. All of these ships, along with the Shûseikan factory built by Nariakira, are considered cases of a unique fusion of Japanese and Western techniques and technologies, developed by Satsuma engineers based on Western books and illustrations, and their own ingenuity, as no Westerners were able to be brought into Satsuma under the shogunate's maritime restrictions policies.[6]

As daimyô, Nariakira continued his efforts towards a guarded Satsuma/Ryûkyû engagement with the Westerners. Out of a combination of motivations, likely both because he sought to expand Satsuma's commercial activities & revenues, and because he recognized the impossibility of defending Ryûkyû from Western military attacks, Nariakira encouraged Ryûkyû to allow a series of concessions to Westerners calling at Naha.

A Treaty of Amity signed by Commodore Matthew Perry and sessei (royal regent) Ôzato Chôkyô in 1854 obliged the kingdom to provide a number of types of aid or privileges to Americans calling at Okinawa, and marked the first time Ryûkyû entered into a formal treaty with a Western power.

The following year, Ryukyuan scholar-official Itarashiki Chôchû, acting within Nariakira's intentions and designs, acted as chief royal representative and interpreter, engaging with Frenchmen who arrived in Ryûkyû that year; a Treaty of Amity was signed between Ryûkyû and France at that time, granting the French free movement throughout Okinawa, and permission to establish a Catholic mission on the island.[7] When the French gifted the King of Ryûkyû with an artillery piece two years later, Nariakira ordered Itarashiki to study the object and its use.[8] In 1857/6, Dutch ships arrived in the islands as well, seeking the establishment of formal trade relations; the shogunate ordered Nariakira to strengthen the kingdom's defenses in anticipation of the Dutch arrival, but Nariakira instead instructed Ryukyuan officials to enter into negotiations, but to keep it secret, as the shogunate would surely be opposed to the competition this would represent for its own revenues from Dutch trade at Nagasaki. Documents discovered after his death revealed that Nariakira also envisioned welcoming Western trade at Unten and Amami Ôshima, with the explicit aim of competing against Nagasaki.[7]

The marriage of Nariakira's adopted daughter Atsu-hime to Shogun Tokugawa Iesada in 1856 contributed to Nariakira's influence within the shogunate; he was one of a number of figures who encouraged the selection of Tokugawa Yoshinobu as next in line to become shogun, as Iesada had yet to produce any heirs at that time. In the end, Iesada did produce an heir, Tokugawa Iemochi, who reigned as shogun from 1858 to 1866, after which Yoshinobu succeeded him.

Nariakira also took steps to acquire Western weaponry for the domain, sending Ichiki Shirô on a secret mission to Ryûkyû in 1858/1 with the objective of obtaining 1,000 rifles and a steam-powered warship from the French; this had to be kept secret from both the shogunate and from Beijing, but was so important to Nariakira that if the French were uncooperative, he planned to have a Ryukyuan official procure such equipment for him from the Dutch or British in Fuzhou. That same year, he had his navy conduct large-scale maneuvers in Kagoshima Bay. It has been suggested that Nariakira also planned to use his 1858 sankin kôtai mission to Edo as a means of bringing an army of roughly 3,000 elite warriors to Kyoto, where he would seek an imperial decree supporting him in marching to Edo and putting pressure on the shogunate to undertake major policy reforms.[9]

None of these plans were carried through due to Nariakira's sudden death on 1858/7/16, said to have been the result of food poisoning.

Following Nariakira's death, a group of low-ranking samurai led by Saigô Takamori and Ôkubo Toshimichi and calling themselves the "Loyalists" (Seichû-gumi), discussed dropping their loyalties to the Shimazu, becoming ronin, and pursuing the completion of Nariakira's plans; that is, they wanted to pressure or attack the shogunate, in the name of the Imperial institution. They may have plotted for the assassination of Ii Naosuke, though it is unclear if they were involved in the actual event (Naosuke was killed in the 1860 Sakuradamongai Incident). Nariakira's adopted heir and nephew, Shimazu Tadayoshi, initially declared to all his retainers that if there were a national incident (jihen, 事変) he would honor Nariakira's will, mobilizing Satsuma forces in support of the Emperor.[10] However, Tadayoshi and his father Shimazu Hisamitsu (who acted as regent and wielded considerable power over domain affairs) were political moderates, at least in comparison to the "Loyalist" radicals, and in the aftermath of Ii Naosuke's assassination advocated a cautious approach. Over the course of the next few years, they worked to reverse many of Nariakira's policies, especially those pertaining to Ryûkyû, and acted in strong support of the shogunate and of samurai privilege through the Bakumatsu and into the Meiji period.

Nariakira was deified as Terukuni daimyôjin by the Imperial Court in 1863, five years after his death. Terukuni Shrine, dedicated to his worship, remains one of the most prominent Shinto shrines in Kagoshima today.

Nariakira had four biological daughters, three of whom (Teru-hime 暐姫, Nori-hime 典姫, and Yasu-hime 寧姫) married other members of the Shimazu clan, and one of whom, Sada-hime, married into the Konoe family of court nobles. His son Shimazu Torajumaru (Tomojirô, 1849-1854) was designated his heir, but died young, at the age of 5 or 6.

A factory complex Nariakira ordered constructed for the military and industrial strengthening of the domain was completed, ultimately, in 1865. The complex employed 1,200 men, and included reverberating furnaces, blast furnaces, a smithy, a foundry, and a glass workshop for the industrial production of porcelains, cannon, rifles, agricultural implements, and glassware.[7] Parts of the complex survive today as the Shôkoshûseikan museum, the main hall of which has been designated an Important Cultural Property.[11]