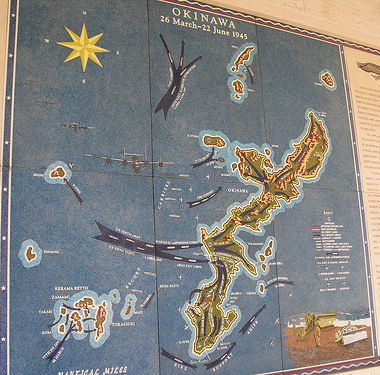 Map of the Battle of Okinawa at Punchbowl Cemetery in Honolulu

Okinawa Island is the largest and most populous island in Okinawa prefecture and in the Ryûkyû Islands. It is home to Naha, the current prefectural capital and former chief port of the Ryûkyû Kingdom, and Shuri, the former royal capital of the Kingdom, today a part of Naha City.

Okinawa has an average annual rainfall of 87.5 inches, with a lush sub-tropical climate year-round, and experiences monsoons and typhoons in summer through autumn.

The name "Okinawa" is said to appear for the first time in the historical record in an account of the 753 journey of the Chinese monk Ganjin, who became castaway or shipwrecked on Akonahajima (阿児奈波), or Akonaha Island, on his way from China to Satsuma province (on Kyushu).[3] The term Okinawa itself, however, appears in the Tale of the Heike, and with the characters 「沖縄」appears at least as early as certain 17th century Shimazu family documents. Uruma, another term often used to refer to the islands, is said to have first appeared in Senzai wakashû, a poetry collection by Fujiwara no Kintô (966-1041).